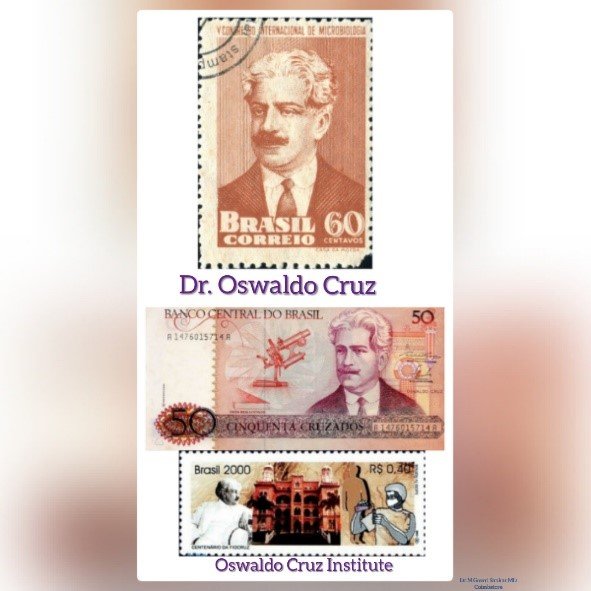 🔹Oswaldo Cruz was born in a small town in Sao Paulo Province, Brazil. He was highly inspired by his father, who was a physician.

🔹Cruz studied medicine at the School of Medicine of Rio de Janeiro and graduated in 1892. During his student life, he showed great interest in bacteriology and published two articles in the Brazil Medical Journal. His passion for microbiology led him to construct a small laboratory in the basement of his house.

🔹As Dr. Cruz was inspired by the great work of Louis Pasteur, who developed the Germ theory of disease, so he visited to Paris and got specialized in bacteriology at Pasteur Institute.

🔹On his return from Europe, Dr. Cruz found that Brazil was devastated by epidemics of bubonic plague, malaria, yellow fever and small pox.

🔹To combat the diseases, the Mayor of Rio de Janeiro wanted to build an institution – similar to Pasteur Institute, Paris – for manufacturing serum to fight the diseases.

🔹Later, Dr. Cruz was appointed as a Director-General of Public Health. During that time, he reformed sanitary laws as well as launched sanitary campaigns. Thereby, he created the public health awareness and reformed the Brazil.

🔹Further in 1907, Dr. Cruz succeeded in eradicating Yellow fever in Brazil by his effective sanitary measures and mosquito control. For this achievement, Dr. Cruz was honoured by the Gold medal on the occasion of the 14th International Congress on Hygiene and Demography which was held at Berlin.

🔹Dr. Chagas first discovered the parasite and named the etiological agent as Trypanosoma cruzi (a tribute to his mentor Dr. Oswaldo Cruz).

🔹Ultimately, Dr. Cruz marked the beginning of experimental medicine in Brazil in many areas, and his vision continues to exert a strong influence on Brazilian science, technology and public health.

A Man of Excellence in Public Health