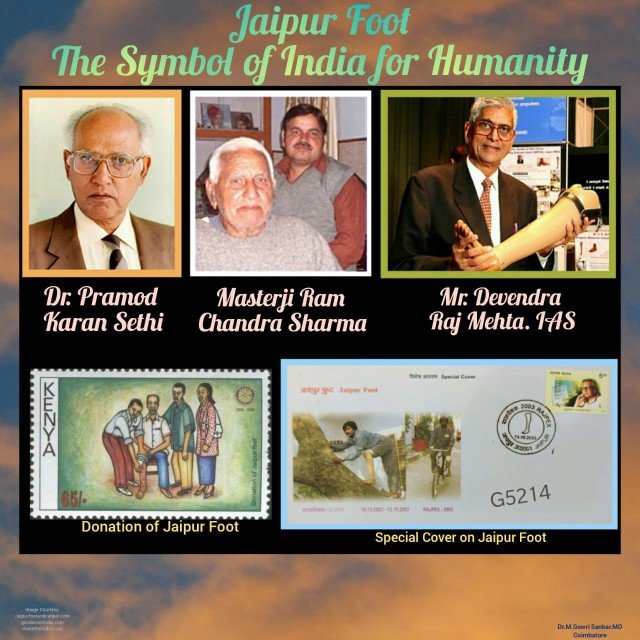 🔸Sethi was born in Varanasi. His father was a Professor of Physics at Banaras Hindu University. He was the great inspiration of Sethi.
🔸He studied MBBS from Sarojini Naidu Medical College, Agra, and graduated with honours in surgery subject in 1949.
🔸He then completed his MS General surgery from the same institution in 1952. He further completed his Fellowship of the Royal College of Surgeons of Edinburgh in 1954.
🔸After returning to India, Dr. Sethi got appointed as a Lecturer in surgery at Sawai Man Singh (SMS) Medical College, Jaipur. There he established the exclusive Department for Orthopaedics & Rehabilitation Unit and served there for next 28 years until his retirement in 1982.
🔸In rehabilitation unit, he witnessed many amputees. Mainly among young people, who had lost their legs in road accidents. They were actually wearing an ill fitted, heavy weight leg prosthesis or using only crutches.
🔸In fact, Dr. Sethi was very keen on treating the rehabilitating amputees and dedicated most of his time to them. One day a local craftsman Pandit Ram Chandra Sharma, (popularly called as “Masterji”) approached Dr. Sethi with an idea of creating a new prosthesis.
🔸Together they designed a new prosthesis meant for the people with below-knee amputation.
🔸By using vulcanised rubber hinged to a wood limb, they developed a below-knee prosthetics, which has virtually the same range of functions as the biological human leg.
🔸The below-knee prosthesis was designed in such a way that it looks just like a natural leg with an advantages such as – light-weight of 1.5 kg, waterproof, worn with or without shoes, ease to walk on uneven terrains, able to squat and sit cross legged and also to ride bicycle.
🔸After their immense work, they refused to patent their invention and named it Jaipur Foot in 1968.
🔸Further, Dr. Sethi collaborated with the Indian Institute of Technology, Mumbai and the National Chemical Laboratory, Pune and developed a lightweight, low-cost calipers of polyurethane for polio affected people.
🔸Dr. Sethi was honoured for his tremendous work with various awards such as Dr. B C Roy Award in 1979, Padmashri award in 1981, Magsaysay Award in 1981, Guinness Award for Scientific Achievement in 1982 etc.
🔸During the time of the invention of Jaipur foot, a young talented IAS officer Devendra Raj Mehta met with a car accident in Rajasthan and was badly injured with 40 fractures.
🔸He was bedridden for 5 months and often visited SMS Hospital, Jaipur for physio. There he observed many poor and disabled people were waiting for the prosthesis.
🔸Then in the year 1975, Devendra Raj Mehta founded a charitable organization Bhagwan Mahavir Viklang Sahyata Samiti, (BMVSS) to provide artificial leg for the poor.
🔸He then joined his brothers and started mass manufacturing and distribution of the Jaipur Foot under BMVSS.
🔸Furthermore, the Mehta brothers popularized the Jaipur foot by conducting camps across the nation and distributed artificial limbs freely to more than 1.9 millions of needy amputees worldwide.
🔸Soon the International Red Cross Committee recognized the Jaipur foot and used it extensively in post Afghanistan war and in other countries to help amputees.
🔸In 1980, the famous dancer cum actress Sudha Chandran had lost her right leg in a car accident. But she continued dancing by fitting the Jaipur foot.
🔸Moreover, the model of Jaipur limb is displayed in the Imperial War Museum, London.
🔸Further, BMVSS collaborated with Stanford University, US for the development of a new Knee Joint prosthesis called the Jaipur Knee.
🔸Today, Jaipur foot is the most widely used prosthetic in the world and has became the symbol of India for Humanity.

The Distinguished People, who Helped Differently-abled People Walk with Pride