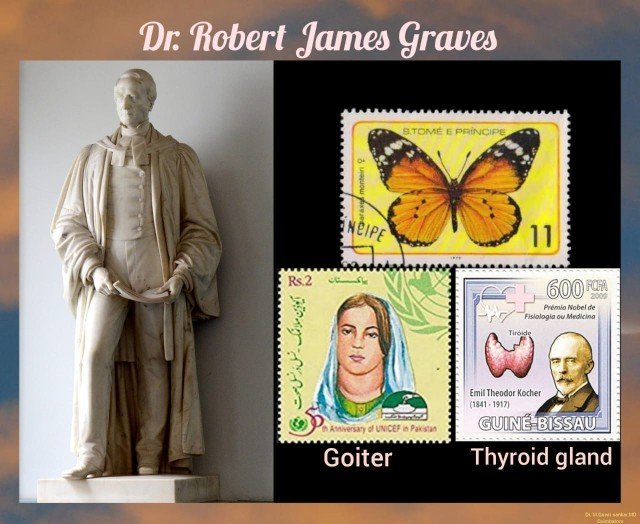 🔹Graves was born in Dublin, Ireland. His father was a Regius Professor of Divinity at the University of Dublin.
🔹Graves studied medicine and graduated with honors from the University of Dublin in 1818.
🔹After his graduation, he travelled to London and the European continent for about three years. When he was in Germany, he was particularly impressed by the system of Bedside Teaching.
🔹Upon his return to Dublin in 1821, he started his career as a Physician at the Meath Hospital, Dublin.
🔹There, he introduced and devoted himself in the system of “Bedside clinical teaching” and thereby he abolished the existing tradition of extensive book knowledge and little practical experience in medicine.
🔹He further encouraged his students to take history of patients and do the physical examination at the bedside. And taught them to present the history and discuss the physical findings with the professor at the bedside and then conclude the treatment.
🔹He also guided the students to attend autopsies to correlate the clinical findings of the patients. Moreover, he insisted that English be the academic language rather than Latin.
🔹His Eponyms…
🔅 Graves Disease – At the age of 39, he gave a lecture on “Newly Observed Affection of the Thyroid Gland in Females” in 1835. His famous description of female patients was presented with Goitre, Palpitations and Exophthalmos.
🔅 Graves Ophthalmopathy
🔹In fact, Graves Disease condition had also been published by his contemporary Dr. Von Basedow, a German physician in 1840 in German language. Hence named as Graves- Basedow’s Disease.
🔹Dr. Graves’ another significant medical contribution was his insistence that the human pulse rate should be timed by a watch and also he insisted to firmly adhere to this in clinical practice.
🔹Furthermore, he published a book named A System of Clinical Medicine, based on his “Clinical lectures” in 1843.
🔹In that, he introduced wide range of topics such as extensive lectures on fever, diseases of the digestive system, asthma, pericarditis, veneral diseases, rheumatism, paralysis including the pinhole pupil after pontine hemorrhage.
🔹Ultimately, his contributions to medicine has extended into the fields of endocrinology, cardiology, neurology, infectious disease and more.
🔹Finally, his contemporary Dr. Armand Trousseau, a prominent French physician, who was the first to suggest the eponym Graves’ disease, described Dr. Robert James Graves as “A Perfect Clinical Teacher.”