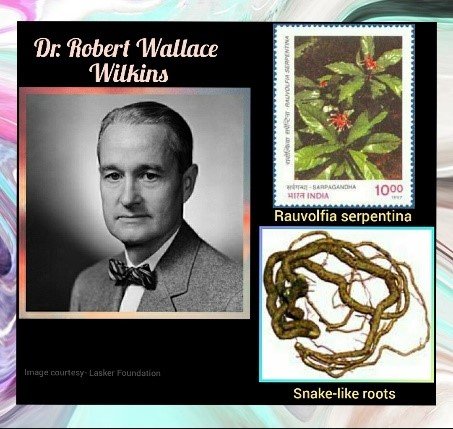 🔹Wilkins studied medicine at the Harvard medical school in 1931. After his studies, he got American College of Physicians fellowship to study at London.

🔹After returning to United States, he began his career as a Research Associate in John Hopkins University, Baltimore. Then he moved to Boston University Medical School as an Associate Professor in medicine and later, he got promoted as a Professor. He worked there until his retirement in 1972.

🔹During the Second World War, he designed a G suite for the use of fighter pilots. It’s a suit which is applied tightly around the leg and increases the blood flow to the brain, thereby preventing pilots from blacking out due to the increased force of gravity during battle in the sky.

🔹In 1952, he was the first physician in the Western world to isolate the drug reserpine from the dried root of Rauwolfia serpentina (Indian snake root) – known as Sarpaganda in ancient Indian medicine. This root has been used for centuries in India for the treatment of insanity as well as fever and snakebites.

🔹Furthermore, he was the first to elucidate the molecular structure and the natural configuration of reserpine. His preparations of the drug reserpine became useful to treat hypertension.

🔹 Moreover, he published his studies on Reserpine in The New England Journal of Medicine during 1953.

🔹Subsequently, he demonstrated the effectiveness of new diuretic drug called chlorothiazide which is used in reducing the blood pressure. He further published his studies related to chlorothiazide in NEJM in 1957.

🔹Consequently, he became the President of the American Heart Association in 1957 and received the Albert Lasker Clinical Medical Research Award in 1958 and Gold Heart Award in 1962 for his research.

One of the Leading Hypertension Researcher