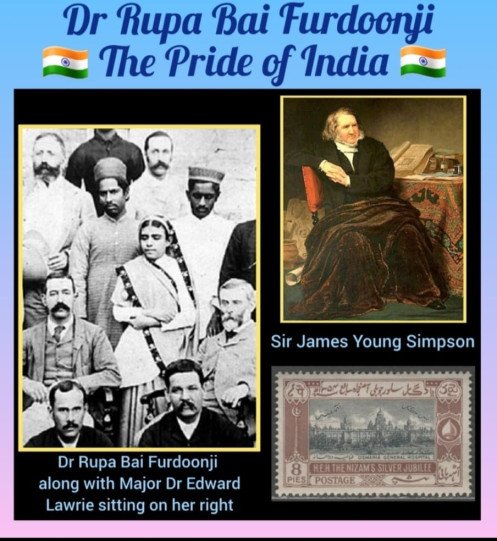 🔹When the British were ruling India, the Princely State of Nizam was allowed by the British to continue to rule as a client king, and the city Hyderabad was the Capital of Nizam.

🔹Indebted to the recovery of his illness by Western medicine, the fifth Nizam of Hyderabad established the Hyderabad Medical School with the support of the British in 1846. (Later this Medical school was renamed Osmania Medical College).

🔹At the same time in 1846, a new era dawned in the field of anesthesia. First, an American dentist Dr. William Morton publicly demonstrated the use of inhaled ether for painless surgical procedures.

🔹Then there was the ground-breaking work done by the Scottish Obstetrician Sir James Young Simpson in the same year 1846 at the University of Edinburgh. He discovered the anesthetic properties of chloroform and he was one of the first obstetricians to administer chloroform anesthesia during childbirth.

🔹His work attracted many surgeons all over the world who studied the properties and effects of chloroform by conducting various trials in animals as well as in humans.

🔹Dr. Lawrie was the first to introduce and popularise chloroform anesthesia in India in clinical practice. As he was a forward thinker, he encouraged Indian women to join medical courses.

🔹Five Indian women enrolled to study medicine at Hyderabad Medical College in 1885, one among them was Rupa Bai Furdoonji.

🔹Dr. Lawrie’s mission was successful in conducting the First and Second Hyderabad Chloroform Commissions, which were held in 1888 and 1891 respectively. Dr. Rupa Bai being an active member of the Chloroform Commission, with the support of Dr. Lawrie, involved herself in a series of experiments with chloroform and studied its action on the heart, fall in blood pressure, and respiration.

🔹This landmark trial was first published in The Lancet in 1890 and in a book named “A Report on Hyderabad Chloroform Commissions,” authored by Dr. Lawrie in 1891.

🔹After completing her medical studies in 1889, Dr. Rupa Bai served as an anesthesiologist and she successfully administered chloroform anesthesia to patients who were getting treatment in the British Residency Hospital (present Sultan Bazaar hospital), Afzalgunz Hospital, and Victoria Zenana Maternity Hospital, Hyderabad.

🔹Moreover, she was closely associated with Dr. Annie Besant, the Founder and President of the Theosophical Society of India. With her encouragement, Dr. Rupa Bai sailed to the University of Edinburgh, Scotland to gain more experience and knowledge in anesthetics.

🔹There she completed her Diploma in Physics and Chemistry because these subjects rendered more knowledge in handling anesthetics.

🔹Subsequently, she pursued a medical degree from the Johns Hopkins Hospital, Baltimore in the United States.

🔹Till 1920, she served as a successful anesthesiologist and retired as the superintendent of Chaderghat Hospital, Hyderabad.

🔹Dr. Rupa Bai was World’s First Female Anaesthesiologist. She contributed a valuable service and pioneered large-scale studies to prove the safety of the drug chloroform. The mission of Major Dr. Edward Lawrie and the dedication of Dr. Rupa Bai Furdoonji had put Hyderabad on the map of the Medical History of the World.

🔹Today her contributions in the field of medicine are preserved in the National Institute of Indian Medical Heritage, Hyderabad.