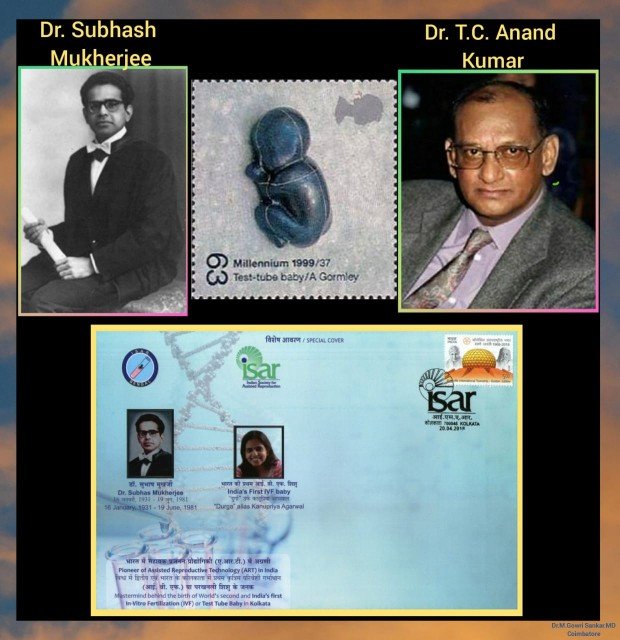 🔸Tiruchirappalli Chelvaraj Anand Kumar was born in Tamil Nadu. He had done his studies at Bangalore and attained his Doctorate from the University of Jodhpur, Rajasthan. Then he went to Birmingham, UK for his further studies.
🔸In spite of many job offers abroad, he wanted to serve the nation. He joined at the All India Institute of Medical Sciences (AIIMS) and served from 1969 to 1982.
🔸In AIIMS, he dedicated himself in teaching medical students and started the neuro- endocrine research laboratory. Also, started the electron microscopy laboratory in 1970 which is still functioning today.
🔸Then, he collaborated with Dr. Indira Hinduja (known for many first in the field of Infertility in India) from the King Edward Memorial (KEM) Hospital, Mumbai and is jointly credited for the achievement of India’s First Scientifically Human Test Tube Baby on August 16th 1986.
🔸Also, he is known for his path-breaking research on nasal contraceptive spray and became the Founder President of Indian Society for the Study of Reproduction and Fertility (ISSRF) in 1988.
🔸Exactly 10 years after his first test tube baby achievement, Dr. Anand Kumar visited Kolkata for attending a science conference in 1997.
🔸There he came to know of the work of Late Dr. Subhash Mukherjee, who had done In Vitro Fertilisation (IVF) and delivered India’s first test tube baby and World’s second test tube baby Durga alias (Kanupriya) in 1978. She was born exactly 67 days after the first IVF done by Dr. Robert Edwards in UK.
🔸Instead of being honoured, Dr. Mukherjee was critizised for his new development and was penalized for the same.
🔸Ultimately, his research paper was termed as absolutely bogus, which destroyed his tolerance. Hence Dr. Mukherjee decided to take his life and committed suicide.
🔸Dr. Anand Kumar collected all the hand written documents of Dr. Mukherjee. After scrutinizing and discussing with his colleagues and Durga’s parents, he concluded that Dr. Mukerjee preceded him by eight years.
🔸By the effort of Dr. Anand Kumar, the discovery of Dr. Mukerjee came to light. In 2002, the ICMR recognized Dr. Mukherjee’s work and acknowledged him as the Architect of India’s First Test Tube Baby.
🔸Subsequently, Dr. Anand Kumar organized a big conference on IVF – held at Bangalore in 2003 – to celebrate Dr. Mukerjee’s work as well as 25th Anniversary of IVF in India. Durga, the first test tube baby of India on her 25th birthday was honoured in the conference.
🔸After his retirement as the Director of the Institute for Research in Reproduction, Mumbai, Dr. Anand Kumar founded Hope Infertility Clinic in Bangalore in 1991, where many of the first generation Assisted Reproductive Technology (ART) specialists in the country were trained and started their careers in this field.
🔸He also played a main role in formulating National Guidelines for Accreditation, Supervision and Regulation of ART Clinics in India.
🔸In order to honour his tremendous work, Dr. Anand Kumar was offered various awards including the Shanti Swaroop Bhatnagar Award (the highest scientific award in our country). The ISSRF has also instituted an award oration – Founder President Dr. T. C. Anand Kumar Memorial Oration in his honor.

A Doyen in Reproductive Biology

The Man Who Stood for Truth and Honesty