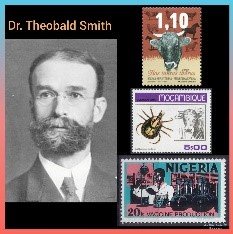 🔸Theobald Smith studied medicine and got his MD graduation from Albany Medical College, New York in 1881.

🔸After his studies, Dr. Smith got appointed as an Inspector of Bureau for Animal Industry to investigate various diseases of animals in Washington.

🔸While Dr. Smith was working under his chief Dr. Daniel E. Salmon, he discovered the bacterial species named (by custom) as Salmonella enterica and eventually formed the Genus Salmonella.

🔸Dr. Smith is also well-known for his ground-breaking work on Texas Cattle Disease, which was a devastating disease that caused huge casualties in cattles.

🔸Moreover, he was the first to demonstrate small Intra-erythrocytic bodies in infected cattles and named the protozoan agent as Piroplasma bigeminum (now called as Babesia bigemina). Also, he discovered Blood-Sucking Ticks as the vector for the disease.

🔸For the first time in history, he had correlated the arthropod with the transmission of infectious disease.

🔸Ultimately, his discovery paved the new way to understand other Arthropod-Borne Diseases such as malaria, typhus, yellow fever and many others. It also made it possible to control the disease by killing the ticks.

🔸Subsequently, he introduced the water sanitation by using “Smith Fermentation Tube method” wherein he researched the coliform count indicating the degree of faecal contamination in drinking water. Thereby he was recognized as a “Father of Total Coliform Count.”

🔸He further undertook many practical and theoretical studies on the production of tetanus and diptheria anti-toxins.

🔸Consequently, he was the first to demonstrate the hypersensitivity reactions of antitoxin in animals – called as “Theobald Smith Phenomenon” – now called as Anaphylaxis.