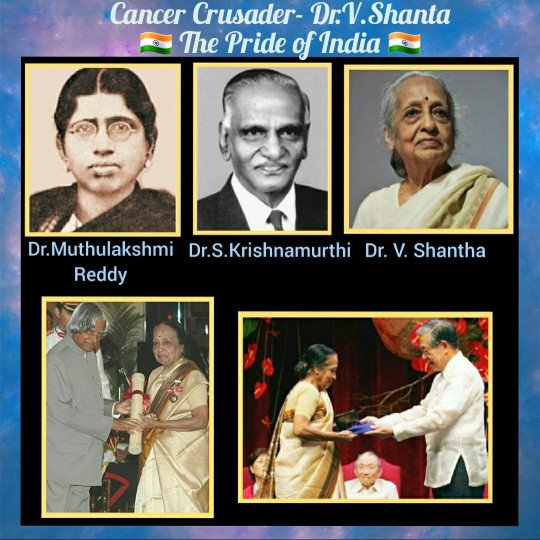 🔹Shanta was born at Chennai in a distinguished erudite family with scientific temper. Her immediate grand uncle Sir C.V. Raman and uncle Dr. S. Chandrasekar were both Noble Laureates.

🔹As Shanta got inspired by the first woman medical graduate of our country Dr. Muthulakshmi Reddy, she enrolled herself to study medicine.

🔹During her Internship, she was lucky enough to get trained under Dr. S. Krishnamurthy, who was the son of Dr. Muthulakshmi Reddy. Dr. Krishnamurthy was a trained oncologist, who had returned from the United States and initiated an exclusive Cancer ward in Government General Hospital, Chennai.

🔹After her post-graduation studies in 1955, Dr. Shanta joined at the Adyar Cancer Institute, Chennai which was the brainchild of Dr. Muthulakshmi Reddy, initiated in 1954 – the first cancer center in the entire South India and second in India.

🔹In early days, Cancer Institute was operating in a thatched hut with 12 beds, one technician, two staff nurses and two doctors. Those two Doctors were Dr. Krishnamurthy and Dr. Shanta.

🔹Dr. Shanta’s journey was remarkable as she progressed from resident medical officer to become the Chairman & Executive Chairman of Adyar Cancer Institute. She was instrumental in building the institute brick by brick.

🔹She dedicated over 60 years to the mission of research, cure and prevention of cancer. Her zeal for oncology enabled her to produce many significant accomplishments for the institution. Those are…

🔸First cobalt-60 teletherapy unit in the entire South East Asia was installed in 1956.

🔸First Medical Oncology unit in the country started in 1970.

🔸First linear accelerator in the entire country in 1976.

🔸First to introduce Hyperthermia in Oncology and ND-YAG Surgical LASER to perform Endoscopic LASER Surgery in our country in 1985.

🔸First to introduce Limb conservation surgery for malignant tumours of the bone by using custom-made prosthesis in 1987.

🔸Installation of first Rapid Arc Therapy facility and Radiotherapy simulator with cone beam facility in the country in 2008.

🔹During her career, she particularly focused on women’s breast and cervix cancer and pioneered in paediatric cancer research in India and established the first paediatric oncology unit in 1960.

🔹For the welfare of cancer patients she influenced the Government and succeeded in getting free bus and train travel pass for cancer patients, implementing screening of cervix cancer in Government hospitals and in establishing the Tamil Nadu Cancer Registry Project.

🔹Her driving mantra “Today’s Research, Tomorrow’s Treatment” led her to publish more than 100 papers in National and International Journals and also contributed many chapters in Oncology books. Also, she compiled a book “My Journey-Memories,” which is a collection of memories about cancer patients.

🔹Dr. Shanta was a cancer crusader and a cancer educator. Her yeomen service was ultimately honoured with many prestigious awards like Padma Vibhushan, Padma Bhusan and Padma Shri from Government of India. In 2005, she was honoured with Ramon Magsaysay Award, better known as the Nobel Prize of Asia.

🔹Dr. Shanta was a symbol of service to humanity. Throughout her career, she lived in a single room within the Cancer Institute premises.

🔹In fact, she is recognized as an ever smiling doctor who cared for the ailing with immense patience and dedication. Like a saint she lived with the principle of “To give and not to take.”

A Veteran Oncologist & An Immortal Physician