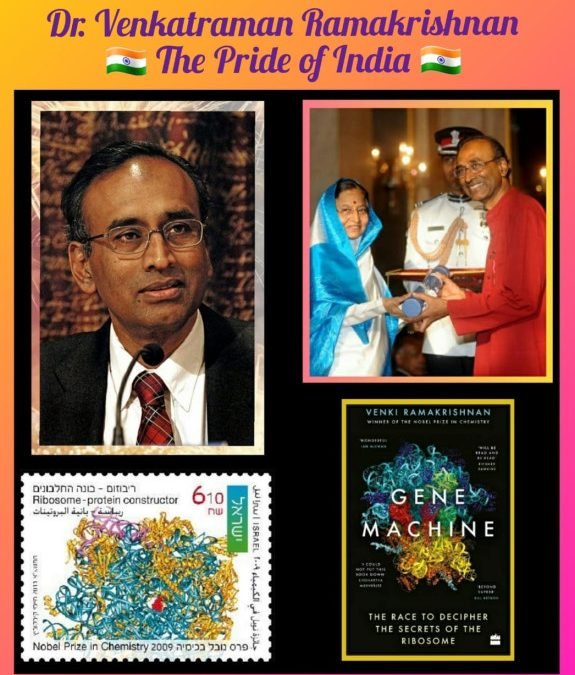 🔸Dr. Venkataraman Ramakrishnan is popularly known as Dr. Venki Ramakrishnan. He was born in Chidambaram, an ancient temple town in Tamil Nadu.

🔸His father got appointed as the Head of Department of Biochemistry at the Maharaja Sayajirao University of Baroda. So, his family moved to Baroda when he was young. In fact, Ramakrishnan was highly inspired by his parents.

🔸During the early days of his career, he had a deep interest in Physics and gradually shifted towards molecular biology. Hence, he studied biology for two years at the University of California, San Diego.

🔸In the year 1982, he did his postdoctoral research at Yale University under his mentor Dr. Peter Moore, who insisted him to study ribosomes in the bacterium Escherichia coli.

🔸As a scientist, Dr. Ramakrishnan worked at Brookhaven National Laboratory, New York.  By using the X-ray crystallography method, he elucidated the structure of ribosomes and also other molecules, such as chromatin and the proteins known as histones.

🔸Thereafter, Dr. Ramakrishnan moved to his present position as a group leader at the Medical Research Council Laboratory of Molecular Biology at the University of Cambridge, England in 1999.

🔸After 15 years of his work on ribosomes, he published his ground-breaking scientific papers in which he presented data on the RNA structure and the organization of 30s ribosomal subunit in Thermus thermophilus (a bacterium used in genetic research).

🔸Subsequently, he revealed the structure of antibiotics bound to 30s subunits of ribosomes as well as its mRNA and tRNA ligands.

🔸Ultimately, his research work led to the insights of how the ribosome reads the genetic code, as well as various aspects of antibiotic function in ribosomes.

🔸He received the following honour for his scientific studies:

🔅Louis-Jeantet Prize for Medicine in 2007

🔅Shared the Nobel Prize for Chemistry in 2009 for his research into the atomic structure and function of ribosomes.

🔸Also, he held several prestigious positions during his lifetime…

🔅Member of the U.S. National Academy of Sciences in 2004.

🔅Member of the Indian National Science Academy in 2008.

🔅Fellow of the Royal Society of London in 2003.

🔅First Indian to became a President of Royal Society of London in 2015.

🔸Apart from that, Dr. Venki Ramakrishnan is the author of Gene Machine, a popular book on the quest for the structure of the ribosome.

An Indian Nobel Laureate Who made Adventures in the Ribosome