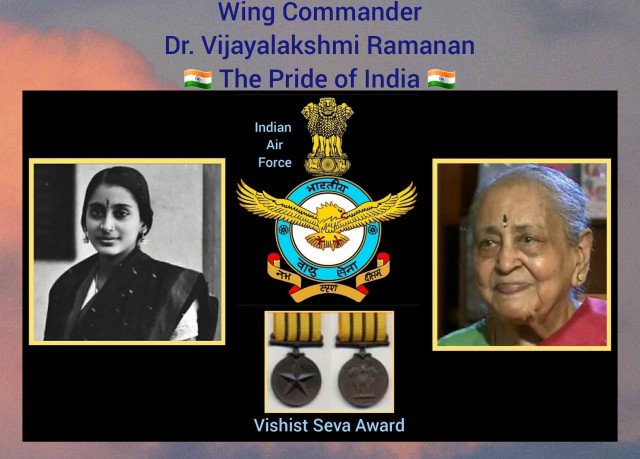 🔹Vijayalakshmi was born in a fourth-generation traditional musician’s family. Her grandfather was a musician in the court of the Travancore kings. She was brought up in Chennai, where her father was working as a public health officer and also a World War 1 veteran.

🔹Since childhood, she imbibed the Carnatic music, and was also studious. She secured high marks in schooling and joined at Madras Medical College to study medicine in 1943.

🔹During her academic career, she received Balfour Memorial Medal for Medicine, Madras University Award for Surgery and was also awarded the best outgoing student in 1948. Then she completed her MD in Obstetrics and Gynecology and served at Egmore Maternity Hospital, Chennai.

🔹She got married to Ramanan, who was an Indian Air Force officer. She was already inspired by her father, who had served for the country in World War 1.  Along with the motivation of her husband, Dr. Vijayalakshmi joined the Indian Army Medical Corps in 1955.

🔹Later, she moved to the Indian Air Force (IAF) and became the first female flight Lieutenant and also got the credit of the first couple to serve in the Air Force.

🔹For some years, she was the only lady officer in the air force. In 1972, she was promoted as a Wing Commander. In fact, she was the first woman officer in IAF who served for 24 years till her retirement in 1979.

🔹Moreover, she was the pioneer for wearing saree as uniform instead of wearing pants. Thus, she designed the iconic saree uniform for women IAF officers.

🔹During Indo-China war in 1962, Indo-Pak war in 1966 and 1971, she dedicated herself in taking care of wounded Indian soldiers in the field. Besides, she gave best obstetrics care in various military hospitals across India by conducting thousands of deliveries.

🔹She also served as a teaching faculty in paramedical courses and did many administrative duties in IAF.

🔹In order to recognize her distinguished service in Indian Armed Force, she was honoured with the Vishist Seva Medal from the President of India in 1977.

🔹Apart from that, she was an avid music lover who had trained in classical Carnatic music and started her concert in All India Radio at just 15 years of age. The radio stations in Delhi, Lucknow, Secunderabad and Bangalore would broadcast her concerts regularly.

🔹After her retirement, she stayed in Bangalore and started her own practice and treated underprivileged patients for free until she turned 80.

🔹Her service number is 4971- MED. The Officer 4971 had an inspiring journey – full of courage and dedication as a treating doctor – both in war fields and for civilians with blue skies in the Indian Air Force.

The Courageous Physician & The Queen of Indian Air Force