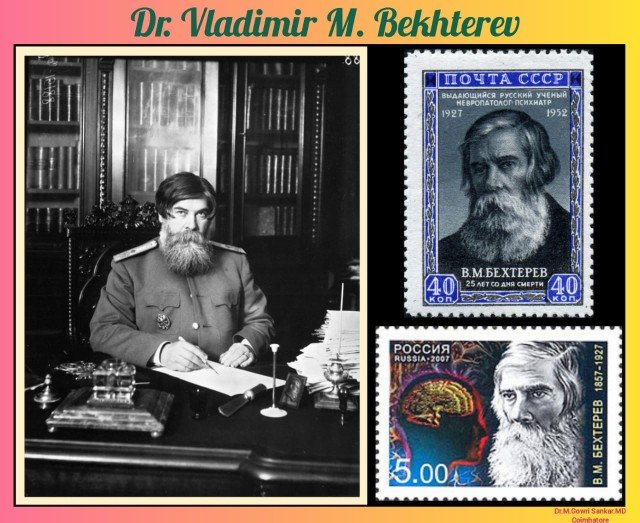 🔹Vladimir Bekhterev was born in the small village in Russia. After his schooling, he studied medicine at Medical-Surgical Academy of St. Petersburg and graduated in 1881. While he was an medical student, he had shown great interest in Neurology and Psychiatry.
🔹In the year 1884, Dr. Bekhterev had an academic trip to Germany and France. When he was in Paris, he got an opportunity to work with Dr. Jean-Martin Charcot, the founder of the world’s first Department for Neurology.
🔹After returning to Russia, he joined the Department of Psychiatry in the University of Kazan, where he established the first laboratory of experimental Psychology and began his fundamental study of the nervous system.
🔹In 1893, he moved to Military Medical Academy in St. Petersburg in the capacity of Head of Department of Mental and Nervous Diseases. Moreover, with great sacrifices and his own money, he founded the Psychoneurological Institute there in 1907 – which today bears his name.
🔹Subsequently, he founded the Neurology Journal, which was the first Russian journal on nervous diseases, in 1896.
🔹Dr. Bekhterev is also the founder of Psycho reflexology, the same pattern of thinking that Ivan Pavlov had developed in his work on conditioned reflexes in dogs, and he used similar experiments. Later he published his work as “Objective Psychology.”
🔹His Eponyms…
🔅 Bekhterev’s Disease or Ankylosing spondylitis.
🔅 Bekhterev’s Nucleus or Superior nucleus of the vestibular nerve.
🔅 Bekhterev’s Nystagmus – Nystagmus that develops after the destruction of the canals of the inner ear.
🔅 Bekhterev’s Acromial Reflex – A deep muscle reflex.
🔅 Bekhterev’s Pectoralis Reflex – A reflex that extends the Pectoralis major muscle.
🔅 Bekhterev’s Reflex I – Dilatation of the pupil upon exposure to light.
🔅 Bekhterev’s Reflex II – Scapulohumeral reflex.
🔅 Bekhterev’s Reflex of Eye – A physiological reflex contraction of orbicularis oculi on both sides in stroke anywhere in the area of the forehead, temple or on the cheekbone.
🔅 Bekhterev’s Reflex of Hand – The hand-flexor phenomena.
🔅 Bekhterev’s Reflex of the Heel – Toe-flexion reflex.
🔅 Bekhterev-Jacobsohn Reflex – A finger flexion reflex which corresponds with the Bekhterev-Mendel foot reflex.
🔹Furthermore, Dr. Bekhterev published about 1700 scientific articles and his significant contribution in neurophysiology became the Seven volume book in the name of “The Fundamentals of the Theory of Functions of the Brain.”
🔹He also founded 12 journals and 50 institutions, including the Russian League Against Epilepsy.
🔹But, after his sudden and mysterious death, his works were deleted completely from the textbooks and scientific articles.
🔹Undoubtedly, Dr. Vladimir Bekhterev played multiple roles in medicine as an outstanding Russian physician, Psychiatrist, Neurologist and the Founder of reflexology in Russia.
🔹Moreover, his work was highly praised as “Only two know the mystery of brain structure and organization. Those two are God and Dr. Bekhterev.”

A Great Neurologist of Russia