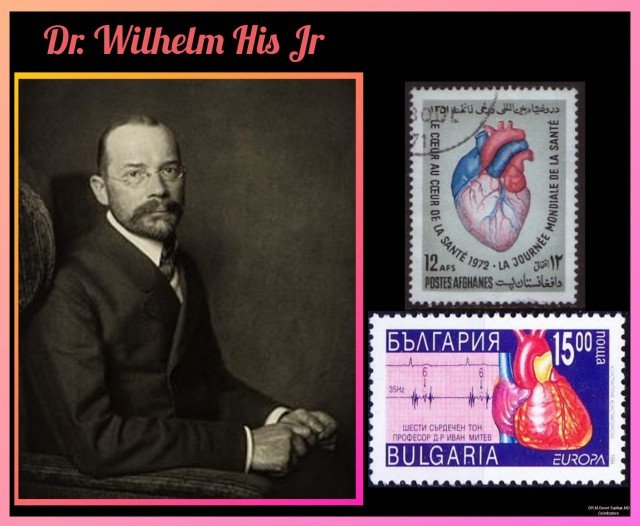 🔹Wilhelm His Jr was the son of famous anatomist of the same name Prof. Wilhelm His Sr (1831-1904), who was the first to accurately describe the human embryo and introduced the term “Endothelium.”
🔹Wilhelm His Jr had done his medical studies at the Universities of Geneva, Leipzig, Bern, and Strassburg, and studied from the brilliant minds of central Europe and graduated from the University of Leipzig in 1889.
🔹He is best known for his work on discovering the “Bundle of His” in 1893, which is the specialized tissue in the heart that transmits the electrical impulses and helps to synchronize the contraction.
🔹Furthermore, he pioneered the studies in cardiac conduction and coined the term “Heart Block,” which he identified as the cause of Stokes-Adams attack.
🔹He was also a professor of medicine at the University of Berlin, and then became the Dean of Medicine there.
🔹His Eponyms….
🔅 Bundle of His
🔅 Angle of His (or incisura cardiaca) is the acute angle between the cardia at the entrance to the stomach and the esophagus. It was posthumously named in 1906 by the Scottish physician & anatomist, Daniel John Cunningham, who is famous for Cunningham’s Text-book of Anatomy.
🔅 His Bundle Electrogram
🔅 His Bundle Pacing
🔅 Werner-His disease also known as Trench fever. A rickettsial disease caused by the infection with Rickettsia quintana and transmitted to man by the body louse.
🔹Moreover, Dr. Wilhelm His Jr was a celebrated master of his profession, a great physician and an investigator. Apart from that he was a Violinist, Pianist as well as a Painter.
🔹Besides his medical research, he involved himself with medical history by publishing The History of the Medicine at Leipzig.

The Physician Behind the Bundle