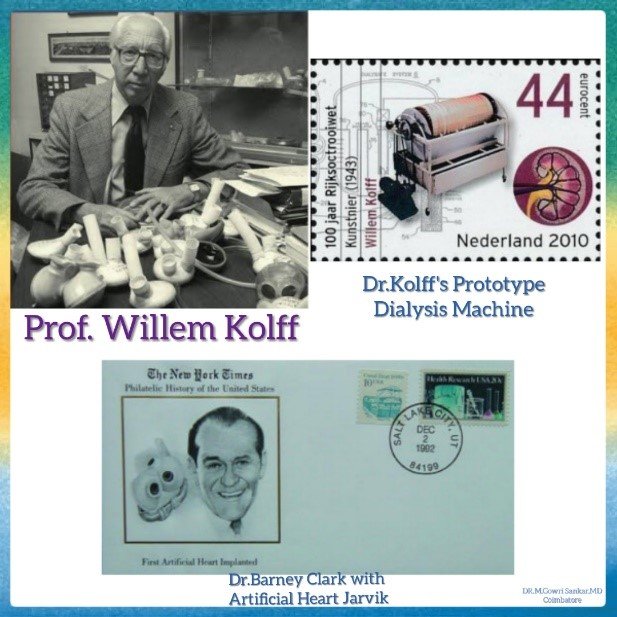 🔸Kolff was born in Leiden, Netherlands as the eldest of a family of 5 boys. His father was a physician in TB sanatorium.

🔸Kolff studied medicine in his hometown at Leiden University in 1938 and later received his Ph.D. from the University of Groningen in 1946.

🔸During the second World War, Netherlands was invaded by Germany. Hence, Dr. Kolff was forced to move out to the small town of Kampen, where he joined work in the town’s municipal hospital. There, he set up the Europe’s First Blood Bank and also saved more than 800 people from Nazi’s by hiding them in his hospital.

🔸The illness of 22 a years old man, who was slowly dying of renal failure, prompted Dr. Kolff to develop the artificial kidney.

🔸In 1943, for the first time in history, Dr. Kolff introduced his rotating drum dialysis machine for the treatment of acute renal failure. Thus, the new era of dialysis began.

🔸He proved his successful dialysis on his 16th patient. He refused to patent his dialysis machine and donated many of his machines to researchers around the world.

🔸He then emigrated to the U.S. in 1950 and joined as a research staff in Cleveland Clinic Foundation. His research into artificial organs did not stop with the kidney.

🔸Further in 1956, he created a Membrane Oxygenator, now known as Heart-Lung Machine, which made the Open-Heart Surgery possible.

🔸Subsequently, he invented the Intra-aortic Balloon Pump Counter pulsations and he published the same in American Heart Journal during 1962.

🔸Later in the year 1967, Dr. Kolff moved to the University of Utah as a distinguished Professor Emeritus of Bioengineering, Surgery and Medicine.

🔸The first artificial heart was implanted into a 61 years old retired dentist named Dr. Barney Clark, in 1982. It extended his living by 4 months.

🔸Moreover, Dr. Kolff was the founding member of the American Society for Artificial Internal Organs and he was the recipient of more than 120 awards – notably the Albert Lasker Clinical Medical Research Award, the highest honor in American medicine in 2002.

🔸Basically, Dr. Kolff was a generous of person who used to share the credit with his co-workers and also encouraged his staff to put their own names to the devices they were working on.

🔸As a pioneer in dialysis and other artificial organ invention, Dr. Kolff has enabled us to save countless lives.

🔸Undoubtedly, Dr. Kolff worked all his life with the philosophy – Inventions Can’t Wait…

The Godfather of Man-made Organ