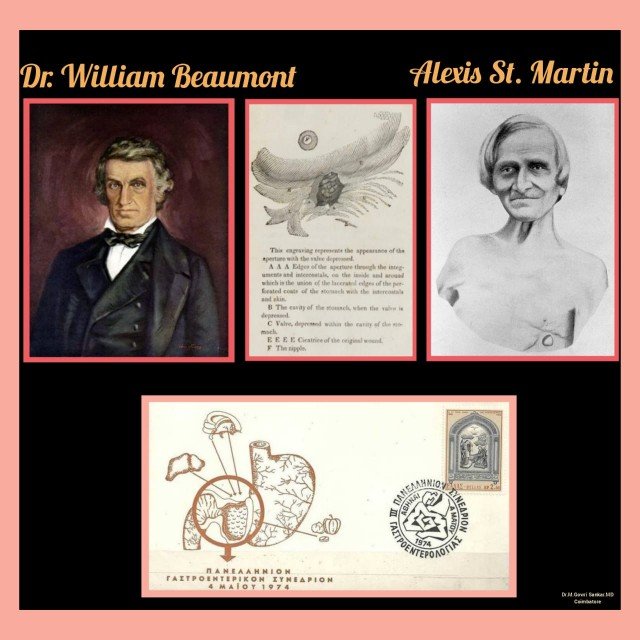 🔹William Beaumont was born in a farmer family at a town called Lebanon in United States.
🔹At the age of twenty-one years, he moved to New York, where he got an opportunity to get trained as a physician and got a medical license as well to practice.
🔹Then, he got appointed as an Assistant Surgeon in the US Army in 1812. In a three years time, he gained vast experience by treating wounded soldiers and performed numerous autopsies.
🔹After the war period, he started his private practice in Mackinac Island. There, he received a patient called Alexis St. Martin, who was accidentally shot by a gun at the American Fur Company so he was severely injured on his ribs and stomach.
🔹In fact, Dr. Beaumont had taken care of him apart from the treatment. By his support, St. Martin survived.
🔹But unfortunately the gunshot had took away the skin portion of the abdominal wall and left a perforation in the anterior wall of the stomach, which created a permanent open gastrocutaneous fistula.
🔹Through this permanent opening, Dr. Beaumont had seen the stomach contractions and was able to insert his entire forefinger into this stomach cavity.
🔹Besides being a physician, Dr. Beaumont had opened his house to St. Martin for about several years to take care of him.
🔹Dr. Beaumont further realized that it’s an opportunity to examine the functions of the stomach by the Open Hole of his stomach. Thereby, he became the first person to observe and reveal about human digestion in the stomach.
🔹Subsequently, Dr. Beaumont had performed many Experiments on Digestion by using the open stomach of St. Martin.
🔅Beaumont tied pieces of food to the end of a silk string and dangled the food through the hole of the stomach. He observed the rate of the digestion of different foods by pulling out the string on every hour of digestion.
🔅He collected samples of gastric juice and established the presence of Hydrochloric acid secretion in stomach. Thereby, he established that digestion was primarily a chemical process and not a mechanical one as believed.
🔅He also observed that exercise helped the production and release of gastric secretions.
🔅He then made a simple observation of normal digestion with the effects of temperature and emotions during the digestive process.
🔅He further established that alcohol as a cause of gastritis.
🔹In the year 1833, Dr. Beaumont published his study as a book of 280 pages named Experiments and Observations on the Gastric Juice and the Physiology of Digestion.
🔹With the support of a unique patient Alexis St. Martin, Dr. Beaumont was able to conduct 238 experiments and created many medical breakthrough’s in gastric physiology.
🔹In order to honor Dr. Beaumont’s extraordinary performance, his name given for several institutions such as
🔅William Beaumont Hospital in Michigan
🔅William Beaumont Army Medical Center in Texas
🔅Oakland University William Beaumont School of Medicine in Auburn Hills & Rochester Hills.
🔹Moreover, Sir William Osler, the Founding Father of Modern Medicine, had praised the performance of Dr. Beaumont as “The Man and the Opportunity had Met.”

A Doctor-Patient Relationship Opened a Gate of New Discovery