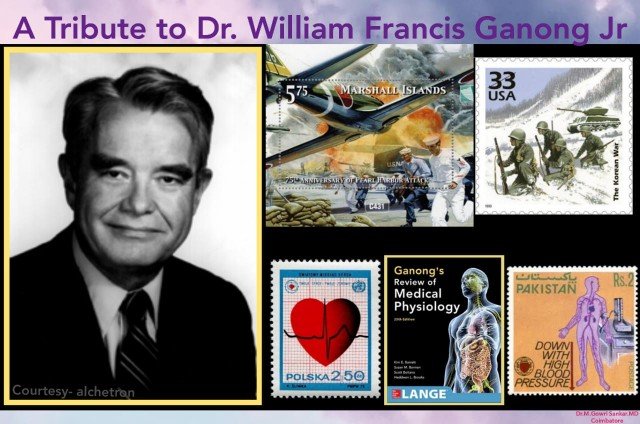 🔹William Francis Ganong Jr. was from a great academic family, where his father Prof. William Francis Ganong Sr. was a renowned Biologist and his mother was a Geologist.
🔹When the Japanese attack was happening on Pearl Harbour in 1941, Ganong Jr. joined in the United States army, where he got an opportunity to enroll in a Special Premedical Programme and subsequently, he received his Bachelor’s degree from Harvard in 1946.
🔹After the Second World War, he earned his MD degree from the Harvard University in 1949.
🔹After completion of his studies, he joined to serve in the Korean War, where he initiated a Mobile Army Surgical hospital, known as a MASH unit.
🔹Later, Dr. Ganong moved to the University of California, San Francisco and began an exclusive basic science research department there.
🔹Further, he became a pioneer in Neuroendocrinology and made several seminal contributions in the field of medicine.
🔹By his research, Dr. Ganong demonstrated that there was another humoral factor beside ACTH that regulates aldosterone secretion. He then identified the Renin-Angiotensin Axis as a major regulator of aldosterone.
🔹In fact, his revelation gave tremendous insight about hypertension and salt and fluid regulation. It became the foundation to the development of newer Anti-hypertesive drugs.
🔹He was also a co-discoverer of Lown-Ganong-Levine syndrome, a pre-excitation syndrome of the heart due to abnormal electrical communication between the atria and the ventricles.
🔹Furthermore, Dr. Ganong published about 200 articles in the area of neuroendocrinology and authored the classic textbook on medical physiology called Review of Medical Physiology. The first publishing was in 1963 and as on 2018, it completed it’s 25th edition.
🔹Moreover, his book has been translated into 18 languages and is used by the medical students around the World 🌏.