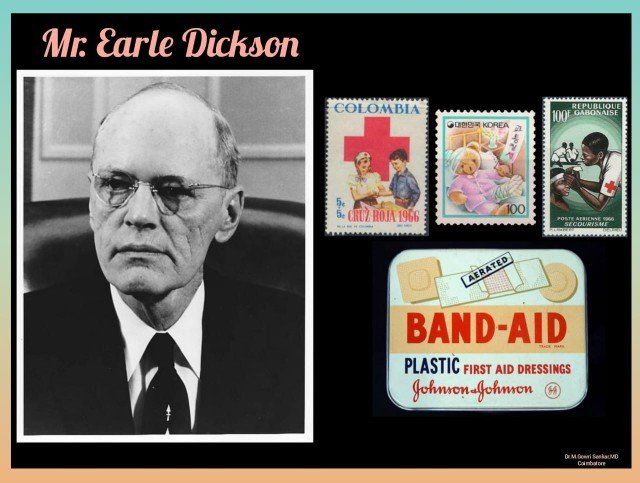 🔹Once upon a time, Mr. Dickson was a regular cotton buyer of the Johnson & Johnson company, New Jersey, U.S.
🔹Dickson’s wife Josephine Frances would often cut her fingers while working in the kitchen.
🔹Hence, he found a traditional big bandage for her injury. It was a gauze kind of material – first it was wrapped and then adhesive was applied. It was too large and clumsy and moreover it did not stick on her fingers for long.
🔹In fact, his tiresome activity had pushed him to find something else. This illuminated a brilliant idea as Dickson was went on to prepare ready-made bandages.
🔹He actually took a long adhesive strip then placed small square shaped sterile gauze on the tape for every few inches and then covered it with crinoline (a stiff fabric) to keep it sterile yet sticky.
🔹His wife found it very easy to cut the small strip and apply herself and it stayed long on her active fingers. Thus the “Band-Aid Prototype” was born in 1921. The couple found that the idea had worked well and felt it could be useful for others.
🔹Thereupon, Dickson shared and demonstrated his ideas to his boss – Mr. James Johnson, who was an American businessman and one of the co-founders of Johnson & Johnson company.
🔹Moreover, Dickson emphasized that the bandages could be applied by people without the aid of others.
🔹Johnson was excited about his idea so he immediately approved to start the production.
🔹Johnson & Johnson was already a popular manufacturer of large cotton and gauze bandages for hospitals. However, they installed some more machines for mass-production of bandages in 1924.
🔹Dickson was the one who invented one of the world’s most useful adhesive bandages. Subsequently, it was produced and sold under the trademark of “Johnson & Johnson’s BAND-AID” a brand name which is now recognized worldwide.
🔹Thus, the BAND-AID became an icon synonymous with healing, comfort and protection.
🔹Initially the BAND-AID sales were less than remarkable. But after few improvements were made in size, the bandage sales quickly took off.
🔹Ultimately, the successful inventor Earle Dickson was honoured by the company by offering the position of Vice President. He held the post until his retirement in 1957.

The Man with Creative Mind that Helped to Heal the Wound