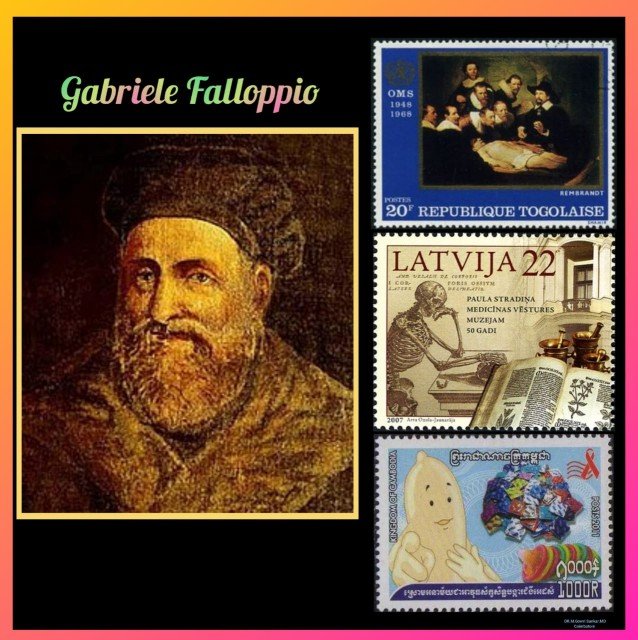 🔹Falloppio unfortunately lost his father at his young age of 10 years. Then he was forced to leave the education to serve as a priest in the church. After their financial problems were settled, he turned to study medicine at the University of Ferrara.
🔹In the beginning of his career, he was recognized for his skillful dissection. Therefore, he was given a position as the chair of Anatomy at University of Pisa and then became a Professor of anatomy, surgery, and botany at University of Padua.
🔹Moreover, he was an excellent instructor and an effective lecturer of his period, which motivated the students from both Italian and foreign countries to study medicine at the University of Padua.
🔹He was the most illustrious anatomist of 16th-century, who described and named numerous parts of the body.
🔹He named the tympanic cavity as Cavum tympani and described the ear ossicles, the oval and circular window, the semicircular canal in the ear and also introduced the names Labyrinth and Cochlea.
🔹He was the first to describe the entire anatomy of female reproductive organ such as uterus, fallopian tubes, ovaries, vagina, round ligament, hymen and clitoris.
🔹 He was the First to Describe…
🔅Ethmoid and sphenoid bone
🔅Chorda tympani
🔅Lacrimal bone and lacrimal duct
🔅Muscles of hard and soft palate
🔅Pharyngeal muscles
🔅Straight tubules and multiple calyces of kidney
🔅Three layered muscular coat of urinary bladder
🔅Inguinal ligament
🔅Tooth bud and the process of replacement of primary tooth by secondary tooth
🔅Primary and secondary ossification of bones
🔅Ilececal valve, valvulae coniventes and villi of small intestine
🔹He had an enormous contributions in neuroanatomy, he identified and described the 3rd, 4th, 5th, 8th, 9th, 11th and 12th cranial nerve. He also contributed to the carotid arteries and vertebral artery circulation.
🔹His Eponyms…
🔅 Fallopian canal or Facial canal – Facial nerve passes through this canal in the temporal bone
🔅 Fallopian Hiatus – An opening in the petrosal bone, which conducts greater petrosal nerve and the petrosal branch of middle meningeal artery.
🔅 Fallopian Tube – Tubes leading on either side from ovary to the fundus of the uterus
🔅 Fallopian Ligament – A fibrous band between the anterosuperior spine of the ilium and the pubic tubercle
🔅 Fallopian Pregnancy or Tubal pregnancy
🔅 Fallotomy Division of the fallopian tubes.
🔅 Fallopian Valve or ileocecal valve
🔅 Fallopian Muscle or Pyramidalis muscle
🔹Further, he was considered as the “Father of Condom”, as he effectively advocated about the use of linen sheath soaked in a salty and herbal solution, tied to the shaft with a pink ribbon to protect against syphilis. He was the first to conduct a clinical trial by experimenting among 1100 men and proved that none of them contracted syphilis.
🔹Likewise, he made a significant contributions in botanical studies. In order to honour his work, his name was given to a Botanical Genus – “Fallopia” in later years.
🔹In fact, Gabriele Falloppio entered the medical history as a reputated anatomist but his extraordinary interest made him become a Multi-faceted scientist. Our present knowledge about human anatomy is based on the revelation of Giant Falloppio.

The Father of Modern Anatomy