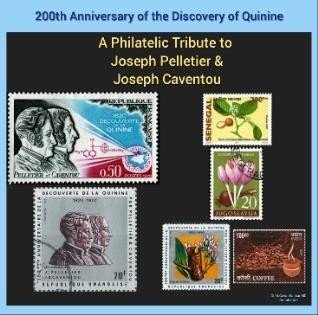 🔸Caventou was the son of an apothecary. He studied Pharmacy and started his career as a Professor of Toxicology (1835 – 1860) at School of Pharmacy in Paris.

🔸He further associated with his mentor Joseph Pelletier, who did a notable research on plant alkaloids.

🔸After some time, together they discovered Chlorophyll (choose the Greek word of Green leaf) in 1817. It’s a green chemical used by plants for photosynthesis.

🔸The Duo also extracted useful plant alkaloids such as:

🔸However, both refused to patent their discovery of their compounds.

🔸Subsequently, they published the method of Extracting Quinine and Cinchonine from Cinchona bark. Therefore, anybody could use the method and manufacture Quinine to combat malaria.

🔸To honour his devoted work, the crater “Caventou” on moon has been given his name.

🔸Both were honoured Philatelically by the French Government in 1970 on the celebration of 150th Anniversary of the Discovery of Quinine.

🔸The year 2020 was the 200th Anniversary of the Discovery of Quinine.

The Duo Who Contributed Alkaloid Chemistry to the Field of Medicine

The Discoverer of Quinine from the Bark of Fever Tree