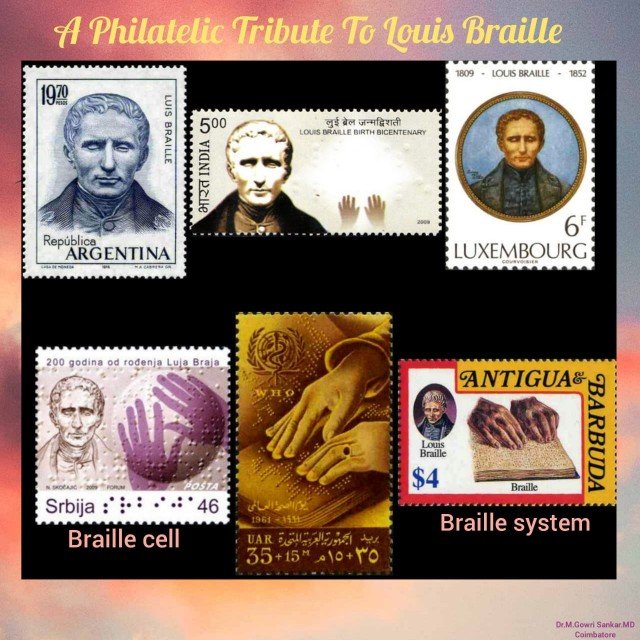 🔹Louis Braille was born in a small village called Coupvray in France. One day while the 3 years old Louis was playing in his father’s shop he accidentally got injured in his right eye by the cobbler’s tool.
🔹Unfortunately, his left eye also inflamed due to subsequent sympathetic ophthalmia and eventually resulted in total loss of vision in both eyes at the age of five years.
🔹In 1819, he entered one of the first blind school in the world called the Institute for Blind Youth in Paris. There he learned the subjects like History, Geometry, and Algebra. Also, he became a notable musician and excelled as an organist.
🔹One fine day, the French military cryptographer named Captain Charles Barbier had visited his school and shared his invention called “Night writing,” a code of 12 raised dots that let soldiers share top-secret information on the battlefield.
🔹Barbier’s code was a little bit complex, yet Louis got inspired by Barbier’s communication system. Louis trimmed his 12 dots into 6 and further developed a system of reading and writing by means of raised dots, which is known today as Braille system.
🔹In fact, the basis of the Braille system is known as a Braille cell. The cell is comprised of six dots numbered in a specific order. Each dot or combination of dots represents a letter of the alphabet.
🔹Subsequently, he published the First-ever Braille book in 1829 and he added symbols for maths and musical notation in his later editions.
🔹His revolutionary system is considered a simple and ingenious method as it enables blind people to read and write and improves the quality of life of the blind.
🔹Moreover, UNESCO effectively universalized the Braille alphabet in 1950 and it recognized the Braille system in 2005 as a “Vital language of communication, as legitimate as all other languages in the world.”
🔹Even after the two centuries of its invention, Braille system remains powerful – By upgrading as Braille computer terminals, RoboBraille email delivery service & Nemeth Braille (a comprehensive system for mathematical and scientific notation).
🔹Although he lost his vision yet, Louis played a successful roles as a Teacher, Musician, Researcher, and an Inventor. Many of his original printed works remain available at the Braille birthplace museum in Coupvray.
🔹Consequently, his birthday is celebrated as the World Braille Day.

The Most Influential Inventor of all Time