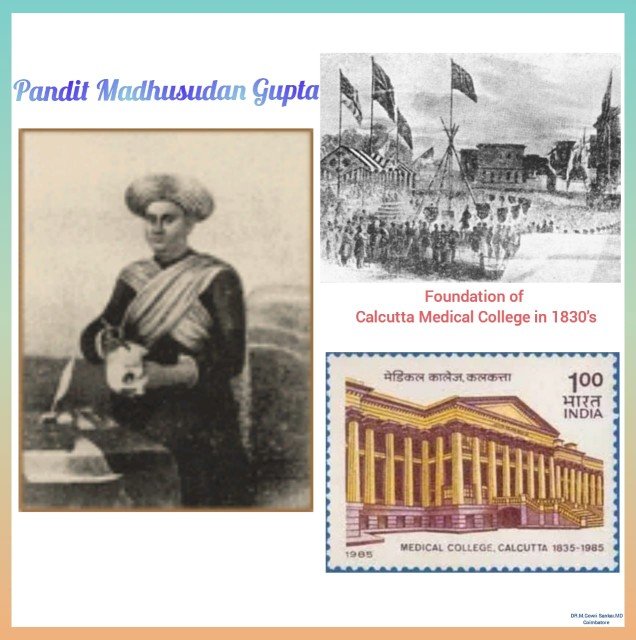 🔹Madhusudan Gupta was born and raised in a proper Vaidya family, a traditional physician caste in Hooghly.
🔹His father, grandfather and great- grandfather were Ayurveda practitioners. So he also studied Ayurveda at Sanskrit College, Calcutta.
🔹After his studies, Gupta became a Sanskrit scholar and an Ayurvedic physician. Then, he became as a teacher in the Sanskrit College.
🔹During his period, Ayurveda & Unani courses were taught at the Sanskrit College for native Indians. Suddenly, the East India Company abolished the system of learning native medicine.
🔹Instead, they opened the door to Western medicine by founding Calcutta Medical College in 1835. It was the first institution for the systematic teaching of Western medicine in India and moreover the first in Asia to train Indians in the art of healing.
🔹Calcutta Medical College had absorbed Gupta as a native teacher and had asked him to study Western medicine as well.
🔹Fundamentally, Anatomy is one of the cornerstones and a unique feature of Western medical education. However, touching dead bodies and dissection was a taboo in our country due to native prejudices and superstitions.
🔹However, Gupta had shown great interest in Western medicine and got trained in it as well.
🔹Consequently, he performed the India’s first human cadaveric dissection in the year 1836 under the guidance of Dr. Henry Goodeve and it was almost 3,000 years after Maharishi Susruta. It was also recognized as the Asia’s first human dissection.
🔹Gupta was widely acknowledged as the “First Indian dissector of British India,” and took the first phenomenal step in the direction of modern medical education. It hailed as a major victory to Western civilization.
🔹The above significant event was duly celebrated by British in a militaristic fashion, by firing a fifty-round salute from the guns at Calcutta Fort.
🔹Subsequent to the first dissection, he completed his graduation in Western medicine and received the degree in 1840.
🔹Further, he served as a Lecturer in Anatomy for twenty-two years in the college and also translated many number of English texts into Sanskrit, including Hooper’s Anatomy.
🔹Apart from that, he worked to improve the public health situation in Calcutta by establishing the proper sanitation; maternal care by training mid-wives of native Indian women; and smallpox situation by vaccination methods.
🔹Undoubtedly, Gupta’s single act of dissection has became a symbolic move of Western medicine in India. Because he cleared all the obstacles that were obstructing the path of human dissections.

An Enthusiastic Pioneer Physician of India