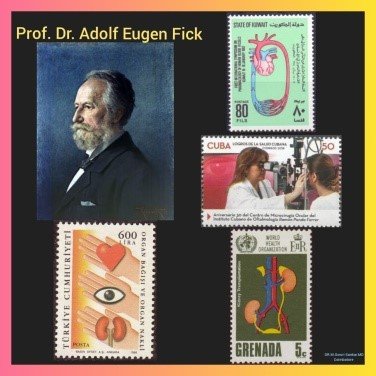 🔸Fick was born as the youngest of nine children. He studied medicine at the University of Marburg, where his elder brother Dr. Carl Ludwig was a professor of anatomy. Under his guidance, he graduated in medicine during 1851.

🔹After his studies he worked along with his brother in anatomy at the University of Zurich. Gradually he became an assistant professor of Anatomy and Physiology and then got promoted as a full time professor during 1862.

🔸Simultaneously, he was very interested in research. As a result, he introduced the Fick’s Laws of Diffusion in 1855.

🔹It states that “Diffusion is Proportional to the Concentration Gradient which governs the diffusion of a gas across a fluid membrane“.

🔸Subsequently, he was the First to measure cardiac output, by using Fick’s principle in 1870.

🔹Moreover, Fick’s Principle has been found to be the most common and convenient method till date – a Gold Standard for estimating the cardiac output and vascular shunt. This principle is also used in renal physiology to calculate renal blood flow.

🔸Thereupon, Dr. Fick made several physiological measurement devices including the First Practical Ocular Tonometer for the measurement of Intraocular Pressure.

🔹Dr. Hans Goldmann, an Austrian ophthalmologist and the Inventor of Applanation Tonometer, based his invention on the Principle of Imbert-Fick Law.

🔹It has been more than 150 years but still we see Fick’s name in physics and in the field of medicine.