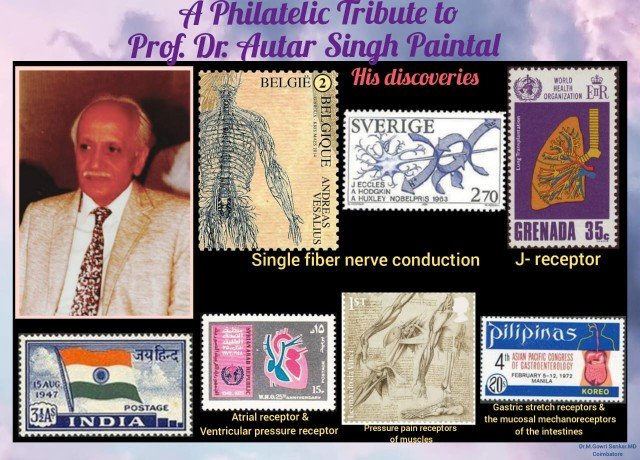 🔹Autar Singh Paintal was born in Burma. His father was a physician served for the British Medical Service in Burma.
🔹Autar Singh studied medicine at King George Medical College, Lucknow and graduated in 1948.
🔹He also obtained his MD degree in Physiology while working on the project entitled, “Electric resistance of the skin in normal and in psychotics.” Thereby, he established the “Paintal Index.”
🔹He then went to the University of Edinburgh as a Rockfeller Fellow and obtained Ph.D. degree in 1953.
🔹After returning to India, he was appointed at the newly established Vallabhbhai Patel Chest Institute (VPCI) at New Delhi as an Assistant Director.
🔹Later, he moved to All India Institute of Medical Sciences, New Delhi in 1958 as a Professor of Physiology and then returned to VPCI as its Director in 1964.
🔹During his early career, dissection of single nerve fibres was considered difficult. Hence, Dr. Paintal innovated the use of liquid paraffin to embed the whole nerve and isolated the single fibres without impairing their activity, this was a tremendous boost in the measurement of single-fibre conduction velocities.
🔹Thus , he made a major contribution to science in the “Development of a single-fiber technique for recording afferent impulses from individual sensory receptors”.
🔹While on experimenting with nerve fibres, he coined the term Fusimotor for the nerve fibres innervating the intrafusal fibres of muscle spindles.
🔹Furthermore, he made the historical discovery of J-receptors. This was recognized as the First Great Discovery in the Field of Medicine in India after Independence.
🔹Thereupon, he coined the name J-receptors to indicate their location in Juxta pulmonary capillaries in the lung. Subsequently, he introduced the concept of viscerosomatic inhibition by showing that these receptors were responsible for the J-reflex.
🔹Moreover, he characterized its reflex and sensory actions on both at sea level and at Himalayan altitude and also established the clinical relevance of J-receptors in respect to breathlessness induced by exercise and in acute respiratory distress syndrome.
🔹He discovered and studied the clinical importance of other sensory receptors as follows:
🔅Type B atrial receptors.
🔅Gastric stretch receptors responsible for the immediate satiation of hunger.
🔅Ventricular pressure receptors.
🔅Mucosal mechanoreceptors of the intestines.
🔅Pressure-pain receptors of muscles.
🔹Actually, his discoveries have had a great impact on our understanding of the behaviour of several visceral receptors in health and disease state.
🔹Ultimately, his outstanding work resulted in numerous honours and awards, including Dr. B.C. Roy National Award in 1973 and Padma Vibhushan in 1986.
🔹In fact, Prof. Autar Singh Paintal was an effective medical scientist who made pioneering discoveries in the area of neurosciences and respiratory sciences. Also, his discovery began a new era in physiological understanding.

The Physician with Quest for Scientific Research