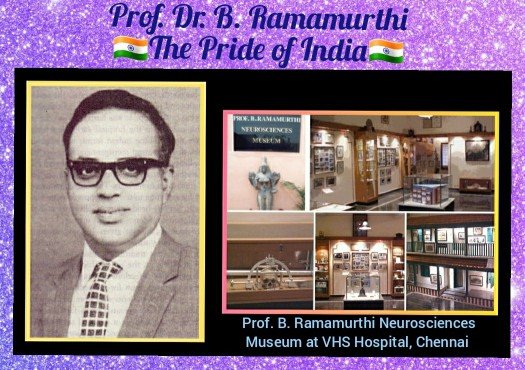 💠Founder of Madras Institute of Neurology

🔸Ramamurthi was born in Tamil Nadu at a small town Sirkazi, Tanjore District. Since childhood he was inspired by his father who was a doctor in the Government Service. Sadly, he lost his mother when he was just five and a half years old.

🔸He was very studious, and therefore secured state rank in intermediate studies and then joined to study medicine at Madras Medical College (MMC), Chennai. While studying medicine, he received many awards including Johnstone Gold Medal. During his college life, he fell in love with his classmate Dr. Indra Lakshmipathi and got married in 1943.

🔸After that, he completed his MS degree in 1947 and FRCS at Edinburgh.

🔸As per the suggestion of his surgery professor, he got into the neurosurgery specialization. By the support of his family, he spent two years in hands-on training in various neuro surgical centers in Europe and also in the Montreal Neurological Institute, Canada.

🔸After his training, he joined as an Assistant Surgeon in his Alma Mater, MMC. After crossing many obstacles and challenges, he developed an exclusive neurosurgery department and further established the Madras Institute of Neurology (MIN) in 1950.

🔸In fact, MIN was the second neuroscience department started in India after Prof. Dr. Jacob Chandy had started the Neurosurgery department at Christian Medical College, Vellore a few months earlier.

🔸Prof. B. Ramamurthi (fondly called as Prof. BRM or Chief) dedicated his professional life completely on developing the neurosurgical department and did many brain surgeries.

🔸During 1960, he started a stereotaxic surgery unit (minimally invasive neuro surgery). Here, he trained and mentored a galaxy of doctors for doing stereotactic procedures and turned MMC into an internationally acclaimed institution in the field of stereotactic surgery.

🔸Further, in association with other giants in the field such as Prof. Chandy, Dr. Baldev Singh and Dr. S. T. Narasimhan, Prof. BRM established the Neurological Society of India at Chennai in 1951.

🔸After his retirement in 1978, he devoted the last twenty-five years of his life to build the Achanta Lakshmipathi Neurosurgical Center and Post Graduate Institute of Neurological Surgery in the Voluntary Health Services (VHS) Hospital, Chennai. Thereby, he became the trendsetter in starting the private academic neurosurgical training institutions.

🔸Moreover, he authored and co-authored over 300 scientific papers and co-edited the following:

🔸Also, he extended his support to establish the National Brain Research Centre at Manesar, Haryana, an apex center for neuroscience research.

🔸He was decorated with various awards including Dhanwantri award, Padma Shri (1972) and Padma Bhushan (1977) from Government of India.

🔸He released his impressive autobiography “Uphill all the way” in the year 2000. Also, Prof. B. Ramamurthi Neurosciences Museum was established at the VHS Hospital campus, Chennai on his 80th birthday in 2002.

🔸One of his favorite quotation – “To reach the unreachable star, It is my quest to follow the star, No matter how hopeless, no matter how far.”

The Neurosurgeon with Incredible Legacy