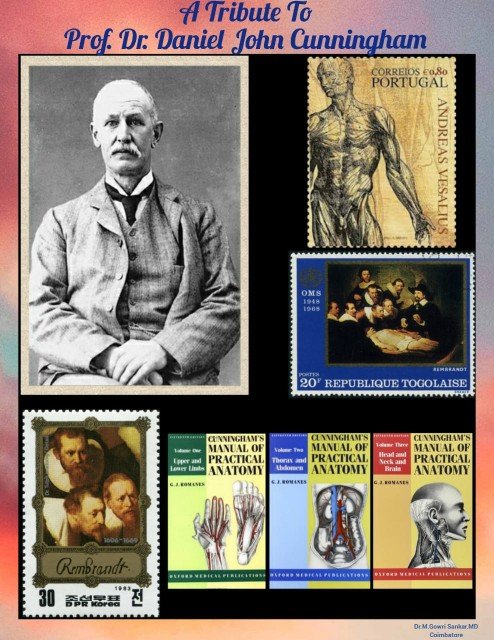 🔸Cunningham was born in a town called Crieff in Scotland. His father was a priest and also served as a principal in a college.
🔸Cunningham studied medicine at the University of Edinburgh and obtained his MD in 1876 with Gold Medal for his thesis.
🔸After his studies, he began his career as a demonstrator for his anatomy professor at his alma mater and worked there until 1882.
🔸He then worked as a Professor of Anatomy at Trinity College, Dublin from 1883 to 1903. In 1903, he returned to the University of Edinburgh, where he worked in the capacity of Professor of Anatomy, until his death.
🔸In fact, he had a great interest in dissection as well as teaching anatomy.
🔸Apart from the above, he produced many scientific contributions not only in the field of descriptive anatomy but also in comparative anatomy, evolution, anthropology and anthropometry.
🔸Moreover, he published many original researches in human and comparative anatomy as well as in the field of anthropology and published articles  “The Lumbar Curve in Man and Apes” and “The Varying Forms of the Stomach in Man and the Anthropoid Ape.”
🔸As a great academician, he served as the President of the Royal Anthropological Institute and in the Anatomical Society of Great Britain and Ireland.
🔸Also, he was a elected Fellow of the Royal College of Surgeons of Ireland and Edinburgh and the Royal Society of Edinburgh.
🔸Actually, Prof. Cunningham is best known for the excellent series of dissection manuals, namely Cunningham’s Text-book of Anatomy and Cunningham’s Manual of Practical Anatomy, which was first published in 1902. The first three editions were prepared under Cunningham’s editorship.
🔸Further, his three volume anatomy dissection book became the constant companion for medical students, and gives a clear and helpful practical advice to the students with best illustrations.
🔸In order to honor his dedicated and incomparable work, his memorial bronze bas-relief (sculpture) has been placed on the walls of the anatomical departments of the University of Edinburgh and of the University of Dublin.