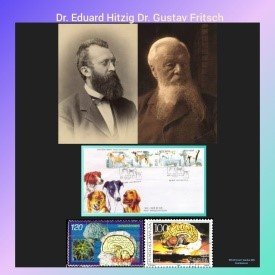 🔹Hitzig studied medicine at the Universities of Berlin and Wurzburg under very famous teachers Rudolf Virchow, Heinrich Romberg and Friedrich Otto Westpal and then received his doctorate in 1862.

🔹During the year 1800, the neuroscientists had started to assign the functions of cerebral cortex.

🔹After some time, Dr. Paul Broca, a French physician, had proposed in 1861 that damage to the left frontal lobe (later named as Broca’s area) leads to aphasia.

🔹Simultaneously, the British Neurologist Dr. John Hughlings Jackson had described the “Jacksonian march” and hypothesized that different areas in the cortex might be responsible for the movement in different parts of the body.

🔹Later, in the year 1870, Dr. Hitzig along with Dr. Gustav Fritsch, a German Physiologist, extended their experimental support for Jackson’s hypothesized motor areas of the brain.

🔹Further they probed the Cerebral Cortex of the Dog and discovered that electrical stimulation at different areas of the cerebrum causes movement in the dog’s contralateral muscles.

🔹Thereby they identified the Brain’s “Primary Motor Cortex” – A vertical strip on the cerebrum.

🔹Furthermore, his work was published as “On the Electrical Excitability of the Cerebrum” in 1870.