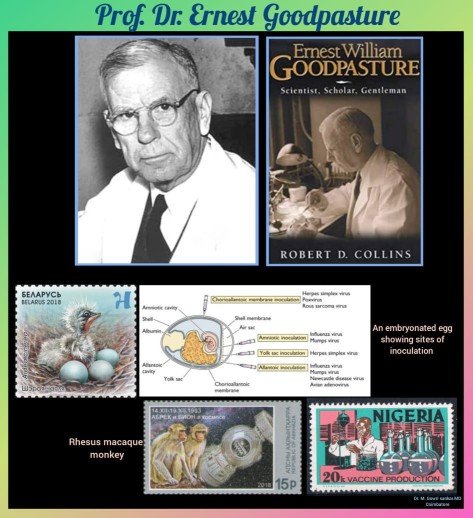 🔹Goodpasture studied medicine and graduated from Johns Hopkins School of Medicine in 1912, where he studied from his professors William H. Welch and George H. Whipple.
🔹After his studies, he was Rockefeller Fellow in pathology and subsequently held various positions in pathology at Harvard University.
🔹Later, he became a Chair of Pathology at the medical school of Vanderbilt University in 1924. He served in that post till 1955.
🔹Simultaneously, his scientific accomplishments had brought him recognition as one of the world’s foremost pathologists.
🔹In fact, his intense interest in infectious agents and viruses had led him towards the development of chick embryos and fertilized chicken eggs technique, which was used for the cultivation and study of viruses. Moreover, it provided an enormous stimulation to virology.
🔹After his constant studies, he successfully found the method for cultivating viruses and rickettsiae in fertilized chicken eggs in the year 1931.
🔹Which in turn raised the production of vaccines against chicken pox, smallpox, yellow fever typhus and Rocky mountain fever and ultimately saved thousands of lives around the world.
🔹Furthermore, he was the first to isolate the mumps virus from rhesus monkeys, which was infected with the specimens of saliva taken from mumps infected patient.
🔹He did this ground-breaking research in 1934 and identified mumps is caused by the virus. Thereby he paved the way for development of mumps vaccine.
🔹His Eponyms…
🔅 Goodpasture’s syndrome – He was the first to report a case about glomerulonephritis and pulmonary haemorrhage during Influenza epidemics in 1919.
🔅 McCullum-Goodpasture stain – A stain for Gram-negative bacteria using aniline fuchsin.
🔹Eventually, he was recognized as a decorated pathologist and a passionate educator of Vanderbilt University, who had devoted his entire life for research and educated hundreds of medical students.

A Pioneer in Modern Virology Research