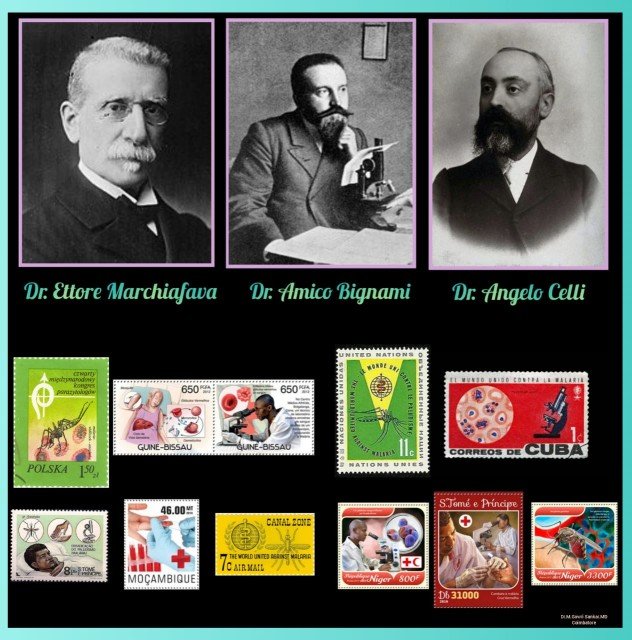 🔹Marchiafava was born in Rome. He studied medicine at the University of Rome and graduated in 1872.
🔹He then started working as an Assistant of Pathology in the same institute. Later, he became a Professor of Pathology in 1885 and he was given an additional posting as Professor of Medicine in 1917.
🔹While he was doing his doctoral course in Berlin, he met Dr. Robert Koch and was very inspired by his way of life.
🔹Subsequently, Dr. Marchiafava along with his colleague Dr. Angelo Celli were the first who confirmed the new Malaria Protozoan, which was actually discovered by the French physician Dr. Alphonse Laveran from the blood sample of the malaria infected patients.
🔹Furthermore, they were the first to use Methylene blue stain to identify the malarial parasite. Consequently, first to recognize the several “Stages of the development of malarial parasite” in human blood.
🔹In 1885, they gave the scientific name “Plasmodium” for these parasites.
🔹Also, they were the first to discover the bacterium (Gram negative diplococci) inside cells in the cerebrospinal fluid of a fatal case of cerebral meningitis in 1884. Later the organism was named as Neisseria meningococcus.
🔹Along with Dr. Amico Bignami, an Italian physician, he published a classic monograph “On Summer-Autumnal Fevers” in 1892. Thus he made his major contributions towards the foundation of modern malariology.
🔹In 1903, the duo also jointly published the case report of demyelination and necrosis of the corpus callosum in Italian heavy red wine drinkers, who died after having seizures and coma – which was named as “Marchiafava-Bignami Disease.”
🔹Simultaneously, it was Dr. Marchiafava who first described the Histopathology of Syphilitic Cerebral Arteritis.
🔹Moreover, he was the pioneer in the field of Cardiac Pathology as the first who proved the importance of sclerosis of the coronary arteries in myocardial infarction.
🔹Additionally, he worked on Nephropathy and described the streptococcal glomerulonephritis. Further, he gave the complete description of Paroxysmal nocturnal hemoglobinuria.
🔹Besides, he was a personal physician to three well reputed popes. He was also a compassionate physician to the poor people of Rome.
🔹In fact, he was the multifaceted figure of Italian medicine as a leader of International science and the founder of the first Italian anti tuberculosis sanatorium at Rome.

A Physician of Great Wisdom