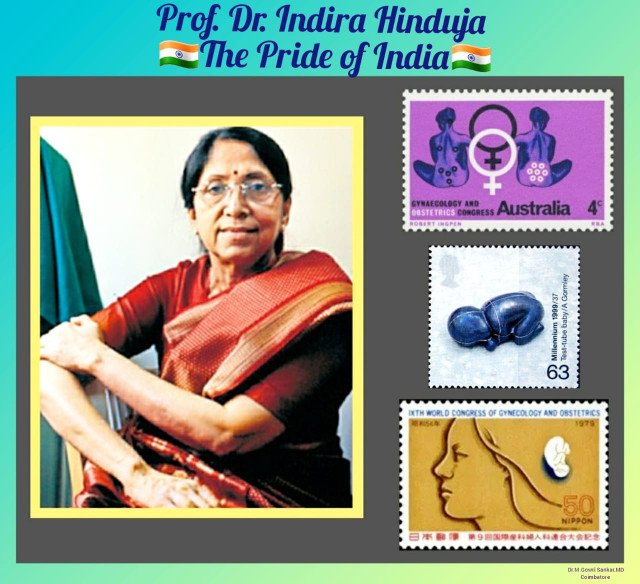 🔹Prof. Dr. Indira Hinduja, a reputed Obstetrician and Gynaecologist, is known for many firsts in the field of Infertility in India.
🔹She was born on August 21, 1946 in Shikarpur, (which is now in Pakistan). During partition of India, her family migrated to Belgaum, Karnataka, where she completed her schooling.
🔹She was highly inspired to study medicine, so she joined at University of Mumbai Medical school and completed her MBBS in 1968.
🔹Then she did her Diploma in Gynaecology and Obstetrics and Diploma in Family Planning. She further completed her MD in Obstetrics and Gynecology in 1973.
🔹After her studies, she joined as a faculty at Seth G.S. Medical College and King Edward Memorial Hospital, Mumbai in the Department of obstetrics and gynecology.
🔹Simultaneously, she involved herself in experimental embryology and cell biology, which made her to pursue Ph.D. degree entitled “Human In-vitro Fertilisation and Embryo Transfer.”
🔹She then collaborated with Dr. T. C. Anand Kumar, a Reproductive Biologist of National Institute for Research in Reproductive Health (NIRRH) and is jointly credited for the achievement of India’s First Scientifically Human Test Tube Baby on August 16, 1986.
🔹Subsequently, she pioneered the Gamete Intrafallopian Transfer (GIFT) Technology, wherein the egg is fertilized in the fallopian tubes. Thereby, she successfully delivered India’s first GIFT baby on January 4, 1988.
🔹Furthermore, she is credited for developing an Oocyte Donation Technique for menopausal and premature ovarian failure patients and gave the country’s first baby by this technique on January 24, 1991.
🔹During her academic career, she became a Professor in the same institution in 1987 and trained many post graduates.
🔹In fact, her work has its paved way into stem cell biology. Her pioneering work in embryonic stem cells, somatic nuclear transfer and pluripotent stem cells in adult ovaries has benefitted many people with the dream of parenthood.
🔹Her outstanding service in the field of medicine has ultimately been honoured with many awards including Padma Shri award in 2011.
🔹Undoubtedly, Birth of India’s First GIFT Baby on 4th January 1988 demonstrates her passion and dedication in the field of In-vitro Fertilisation. IVF treatment has helped around 15,000 couples and earned her a place in Indian medical history.