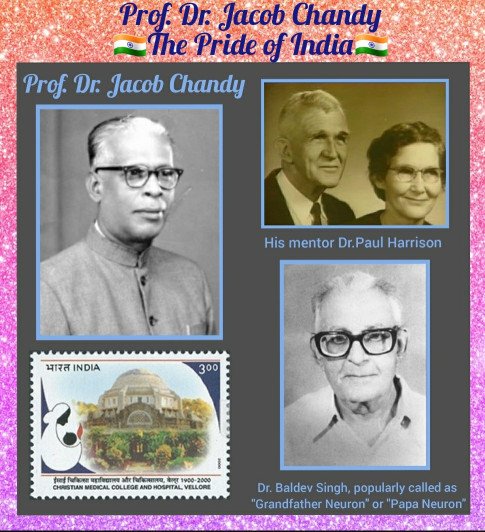 💠Father of Modern Neurosurgery in India

🔸Chandy was born in a Syrian Christian family in Kerala. His father and grandfather were priests in a church. He was brought up in a remote village but with strong religious faith and missionary orientation.

🔸Sadly, he lost his mother at his young age. But the question of WHY his mother died was echoing in him. This made him to pursue medicine.

🔸He secured high marks in pre-university studies and through scholarship joined to study medicine at Madras Medical College (MMC) and graduated in 1936.

🔸After graduation, Dr. Chandy worked in a missionary hospital in Bahrain, Saudi Arabia. There he met his mentor, Dr. Paul Harrison, a missionary doctor and an innovative surgeon, who had trained under American Neurosurgeon, Sir Harvey Cushing.

🔸Dr. Harrison not only taught him surgery but also financially helped Dr. Chandy to pursue Neurosurgery in United States.

🔸Later, with the reputation and support of his wife Dr. Thangam, Dr. Chandy got trained in surgery in the University of Pennsylvania. Then did Neurosurgery in the prestigious Institute of Montreal Neurosurgical Institute. Also, completed Fellowship in Royal College of Surgeons, Canada.

🔸In 1949, Dr. Chandy stepped into CMC, Vellore with a big mission. After facing many obstacles, he started India’s first exclusive Department of Neurosurgery, as well as, the first post-graduation training course for Neurosurgery.

🔸Along with Dr. Baldev Singh, a UK trained Neurologist, who also got trained in EEG, the duo performed many brain surgeries. Dr. Chandy was the first surgeon in India to perform an epilepsy surgery for refractory seizures in 1952.

🔸Throughout his career, Prof. Chandy performed thousands of brain surgeries and also introduced many innovative techniques. Moreover, he was key in initiating neuro department in many institution of our country including AIIMS, Delhi.

🔸During his days, all the post graduates were well trained in neurosurgery as well as in research and came out as effective Neuroscientist.

🔸Furthermore, in India, Prof. Dr. Chandy became the Founder President of Neurological Society of India, which was started along with Dr. Baldev Singh, Prof. Dr. B. Ramamurthi (the Founder of Institute of Neurology in MMC, Chennai), and Dr. S. T. Narasimhan (a Pioneer Neurologist).

🔸The outstanding contribution of Prof. Dr. Chandy was honoured with various awards including the Padma Bhushan award from Government of India in 1961.

🔸His inspiring autobiography was published in 1988 entitled Reminiscences and Reflections. It represents the anecdotes of his professional life and the growth of CMC, Vellore.

🔸In fact, Prof. Dr. Chandy did a phenomenal work in the field of Neurosurgery and adhered to the quote “I shall show you the way, you will have to walk it. Nobody else can walk for you.”

A Day to Commemorate