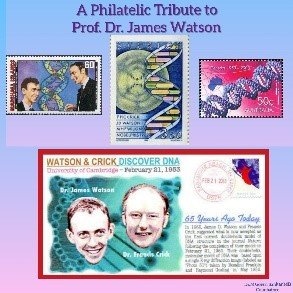 🔹Watson was born in Chicago. He was basically very keen on learning things even from his childhood. He used to raise the word “why?” very often and was never satisfied with simple answers.

🔹In fact, he wanted to become an Ornithologist because he was interested in birds. Hence, he studied Bachelor degree in Zoology at the University of Chicago.

🔹One day, he got a chance to read the science book titled “What is Life? The Physical Aspect of the Living Cell.” After reading that book, he was fascinated by genes and made a profound impact to choose the profession genetics.

🔹After completing his Ph.D. at Indiana University, he began to work at the Cavendish Laboratory of the University of Cambridge, UK.

🔹There, he met Francis Crick. He was a Ph.D. student, who used to share his interest by the way of puzzling out the structure of DNA.

🔹The Duo understood that discovering the structure of the DNA molecule would be a major scientific breakthrough. Initially they faced many difficulties to build a DNA model.

🔹In the year 1953, they jointly Discovered the structure of DNA in the form of a three-dimensional double helix, which resembles a twisting ladder.

🔹To arrive at this ground-breaking discovery, Watson and Crick had used the work of English chemist Dr. Rosalind Franklin, a colleague of Dr. Maurice Wilkins’s at King’s College London by their X-ray diffraction photographs of DNA.

🔹In order to honour the great work of discovering DNA structure, Watson, Crick and Wilkins were awarded with shared Nobel Prize for Physiology and Medicine in 1962. Actually, their discovery has paved the breakthrough in the field of genetics and medicine.

🔅 The Double Helix: A Personal Account of the Discovery of the Structure of DNA in 1968.

🔅 His autobiography, “Avoid Boring People, Lessons from a Life in Science” in 2007.

🔹In the year 2007, Dr. Watson’s own genome was sequenced – unveiling the Six-billion-nucleotide genome of a single individual for the first time.

🔹Later in 2014, Dr. Watson auctioned his Nobel prize to raise the fund for scientific research. A Russian billionaire Alisher Usmanov, made the winning bid of 4.1 million dollars.

🔹But, Alishar returned back the Noble prize to Watson and said “It was a huge honour for me to be able to show my respect for a scientist who has made an invaluable contribution to the development of modern science.”

The Discoverer of DNA Duplex

“The Coil of life”