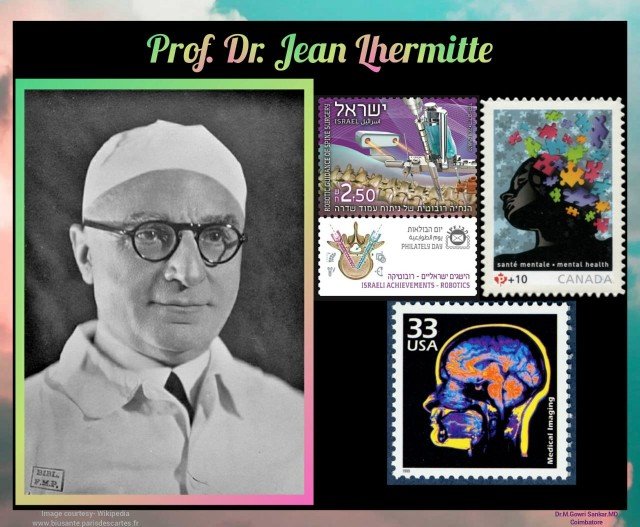 🔹Jean Lhermitte was born in a village called Mont-Saint-Pelere in France. His father was an artist.
🔹He studied medicine and graduated in Paris during 1907. He had a great interest in neurology and psychiatry so he continued his studies and pursued specialisation.
🔹After his studies, he got appointed as a Associate Professor of mental illnesses and later became Clinical Directorship at the Salpetriere Hospital, the reputed hospital in Paris for nervous system.
🔹He then studied about Spinal cord injuries and extended his studies on Neuropsychiatry during the First World War.
🔹Because of his devoted service, he became one of the Founder of Neuro psychology. In fact, he argued and declared that neurology and psychiatry are the two disciplines that can not and should not be separated.
🔹Furthermore, he had shown interest in Visual Hallucinations and later he published this topic in a Journal. He also penned and published around sixteen books and more than eight hundred articles.
🔹His Eponyms…
🔅 Lhermitte’s sign – Flexion of the neck in patients with multiple sclerosis produces electric shock-like sensations that extend down the spine and may shoot into the limbs.
🔅 Lhermitte’s peduncular hallucinosis – A vivid visual hallucinations that typically occur in dark environments and last for several minutes.
🔅 Lhermitte’s syndrome – A rare syndrome of  ocular palsy with nystagmus and paralysis of adduction during attempted lateral deviation of the eyes.
🔅 Lhermitte-Cornil-Quesnel syndrome – A slowly progressive pyramidopallidal degeneration.
🔅 Lhermitte-Duclos syndrome – A rare pathologic entity with  hypertrophy of the stratum granulosum of the cerebellum.
🔅 Lhermitte-Levy syndrome – A syndrome of slowly progressing paralysis after a stroke.
🔅 Lhermitte-McAlpine syndrome – A combined pyramidal and extrapyramidal tract syndrome in middle-aged and elderly persons.
🔅 Lhermitte-Trelles syndrome – A syndrome of lymphoblastic infiltration of the peripheral nervous system, associated with paralysis and amyotrophy.
🔹During his lifetime, Prof. Dr. Lhermitte, due to interest, covered a wide range of neurology. Moreover, he is one of the greatest clinical neurologists of all time and his enthusiasm has inspired many younger contemporaries.