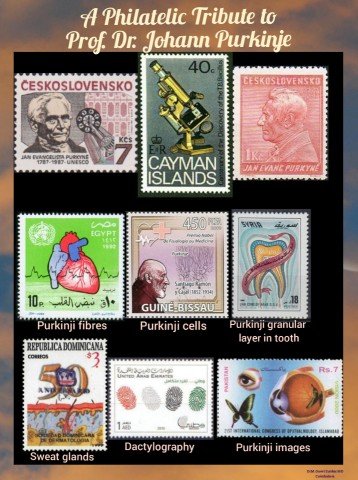 🔹Purkinje was born in the Czech Republic. He studied medicine from Charles University in Prague and graduated in 1818.
🔹Then he was appointed as a Professor of Physiology and Pathology at the University in Breslau in Poland, There he initiated the innovated teaching methods in physiology.
🔹For the first time in the world, he established the exclusive Department of Physiology at the University of Breslau in 1839 and subsequently created the World’s first official physiology laboratory in 1842.
🔹Furthermore, he was the first who used the Microtome, which is a mechanical device for slicing thin tissue sections for microscopic examination. He was also one of the first to use an improved version of the Compound microscope – brought two colors into focus at the same time. Hence, he was able to examine very accurately the structure of the cells.
🔹Thereupon, Dr. Purkinje coined the scientific terms Plasma and Protoplasm.
🔹Moreover, he is best known for his following discoveries and key contributions:
🔅 Purkinje cells – A large neurons with many branching dendrites found in the cerebellum (1837).
🔅 Purkinje fibers – The fibrous tissue that conducts electrical impulses from the atrioventricular node to all parts of the ventricles of the heart (1839).
🔅 Purkinje bone corpuscles
🔅 Purkinje granular layers – Branched spaces in tooth enamel.
🔅 Purkinje tree – Shadows of retinal vessels seen when light enters through sclera.
🔅 Purkinje images – The reflections of objects from structures of the eye.
🔅 Purkinje effect – The simple dark adaptation and dark adaptation for red-blue light.
🔅 Purkinje’s law of vertigo.
🔹He also discovered…
🔅 Sweat glands and published the Nine (9) principal configuration groups of dactylography (1823). He was the first to describe and classify the finger prints, which helped the British Polymath Francis Galton to identify criminals in forensic medicine.
🔅 Intracytoplasmic pigment Neuromelanin in the substantia nigra (1838).
🔹Consequently, Dr. Purkinje became one of the best known scientist of his time. Thus, people all around the world used to mention his postal address as “Purkinje, Europe” – That much fame, he had in Europe.
🔹In order to honor his immense work, the crater on the Moon 🌕 has given name as Asteroid 3701 Purkinje.
🔹In fact, Dr. Purkinje was a trend-setting scientist. He dedicated whole of his career to pave the way for the renovation of physiology. Besides, he performed research in various fields such as anatomy, physiology, histology, dentistry and ophthalmology.

A Pioneer of Modern Experimental Physiology