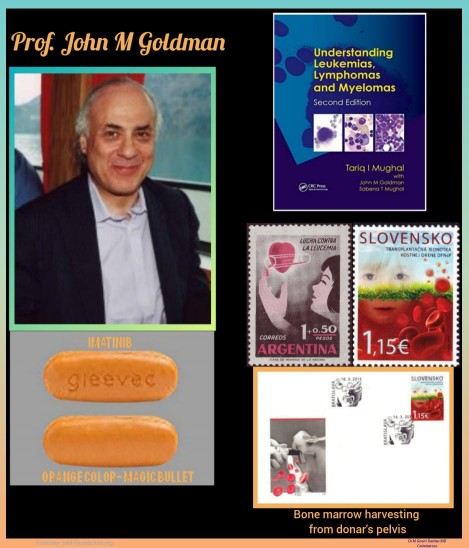 🔹John M. Goldman was born to a physician father in London. Goldman studied medicine at Magdalene College, Oxford and completed his medical training at St. Bartholomew Hospital, London.
🔹He then got trained in various fields such as surgery, oncology and radiation therapy from the University of Miami and Massachusetts General Hospital.
🔹Thereafter he realized his intense interest towards Haematology. Subsequently, he joined at Hammersmith Hospital, London with a focus on chronic myeloid leukemia, which was an incurable disease, when he started his research in 1975.
🔹In fact, Dr. Goldman was the first to autograft patients with CML by using peripheral blood stem cells and started allogeneic stem cell transplant for CML in 1980.
🔹He also developed PCR technology for monitoring residual disease by detecting residual leukaemia cells in the blood of patients.
🔹Furthermore, he promoted the preclinical research and confirmed the efficacy of Tyrosine Kinase Inhibitor (Imatinib) in 1997. In spite of this miraculous achievement, no drug company came forward to develop the drug.
🔹Hence, Dr. Goldman flew to Switzerland to persuade Novartis to produce imatinib. He succeeded and was instrumental in promoting imatinib. He was the first to use it in the clinic in 1999. Today, it’s being used to cure thousands of CML patients worldwide.
🔹Thereupon, he involved himself in the development of second generation Tyrosine Kinase Inhibitors – Dasatinib and Nilotinib.
🔹Additionally, he founded the charity named LEUKA to raise the fund in order to support for leukemia.
🔹 He also helped to establish the Anthony Nolan Trust Donor Registry, which has more than 500,000 volunteers now and is used to find donors for recipients worldwide.
🔹Dr. Goldman became a leader in the studies of leukaemia and published more than 700 scientific papers and numerous books.
🔹Besides, Dr. Goldman was the editor of world famous journal Bone Marrow Transplantation from 1985 until his death in December 2013.
🔹Ultimately, his enormous contribution to haematology has changed the paradigm in the treatment and monitoring of chronic myeloid leukemia.