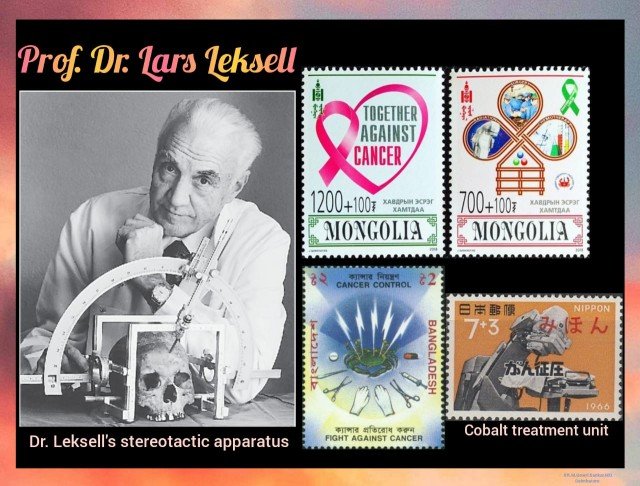 🔹Lars Leksell was born in Sweden. He studied medicine at the Karolinska Institute in Stockholm and then completed his Neurosurgical Training in 1935.
🔹After his studies, he began his career at the University of Lund and became a Professor at the Karolinska Institute. He was gradually promoted to the post of Chairman of Neurosurgery by 1960. He served there until his retirement in 1974.
🔹Dr. Leksell was very fascinated with the neurosurgical field and had a great vision for the development of minimally invasive brain surgery.
🔹Furthermore, he pioneered in modern neurosurgery techniques by introducing an improved Sterotactic frame in 1949 – named as the Leksell Sterotactic System.
🔹Subsequently in the year 1950, Dr. Leksell joined with the radiation biologist Dr. Borje Larsson and together developed the concept of radiosurgery by using Cyclotron.
🔹They further investigated the new non-invasive method by combining radiation beams with stereotactic devices capable of pinpointing targets within the brain with minimising the effect on the surrounding tissues. This is how the “Gamma Knife” was born.
🔹Thereby, Prof. Leksell was recognized as the Inventor of Radiosurgery & Developer of the Advanced Radiosurgical Platform, by using his Leksell Gamma Knife, which is a gold standard in intracranial radiosurgery.
🔹Additionally in 1967, the radiosurgical pioneers arranged for construction of the First Gamma Knife device using cobalt-60 as the energy source. Dr. Leksell coined this new surgical technique as “Stereotactic Radiosurgery.”
🔹Actually, Stereotactic radiosurgery is a non-invasive alternative to the traditional brain surgery and radiation therapy for treating the complex and difficult to treat brain conditions.
🔹The first Leksell Gamma Knife stereotactic radiosurgery procedure was developed by him to treat pituitary adenoma on January 1968.
🔹In fact, the Gamma Knife radiosurgery technique celebrated its 50th year in 2018.
🔹Moreover, he established a company to commercialize stereotactic and radiosurgery instruments in the name of Elekta in 1972 and he was the Founder and Chairman of that company.
🔹Dr. Leksell’s technique is used as an effective treatment for many conditions such as arteriovenous malformations, pituitary tumors, acoustic neuromas, craniopharyngiomas, meningioma, metastatic skull base tumors and primary brain tumors.
🔹More than 1.1 million lives have been saved by this modern neurosurgery therapy till date.
🔹Prof. Dr. Leksell is recognized as one of the greatest innovators and investigators of modern neurosurgery with a life-changing dedication to finding better ways to treat intracranial disorders.