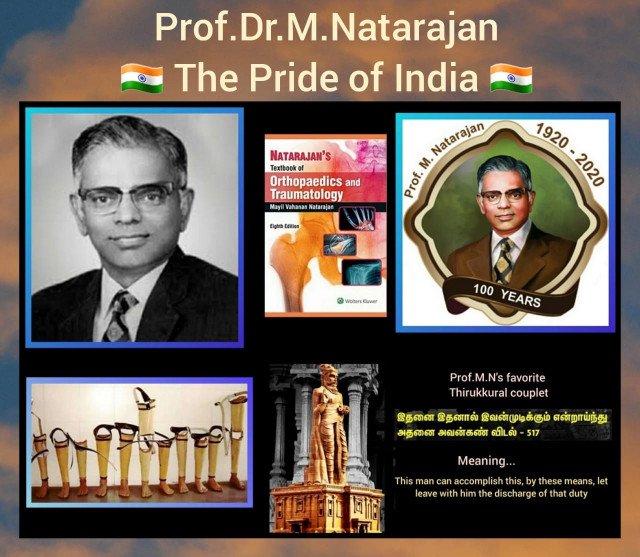 💠Pioneer in the Field of Rehabilitation Medicine

🔸Natarajan was born in a small town Kamuthi at Ramanathapuram district of Tamil Nadu.

🔸After graduating with B.A degree, he studied medicine at Stanley Medical College, Chennai. During his student life, he had a brilliant academic career – he won 10 medals and several prizes at College level as well as University level including Government Gold Medal for the Best Graduate of the year 1944 and earned the name “Medal” Natarajan.

🔸During the Second World War, he volunteered and served in Armed Forces Medical Service. Then he underwent training in Orthopedics in the United Kingdom where he completed F.R.C.S and M.Ch (Ortho) in Liverpool.

🔸Upon his return to India, he joined as an Assistant Professor in Orthopedics at Stanley Medical College and Hospital.

🔸Later, he became Professor and Head of Department of Orthopaedic Surgery in Madras Medical College (MMC) and hold the post for 19 years (1957–1976).

🔸During his career in MMC, he took steps in development of the Ortho specialty by starting courses such as:

🔅School of Prosthesis and Orthotics.

🔸He strongly believed that the orthopedic ailment extends beyond the treatment. So, he pioneered the Rehabilitation Medicine for his patients for physical, psychological, social and economic wellbeing.

🔸While he was the Director of The Artificial Limb Center at MMC, he emphasized the need of engineering skills for manufacturing artificial limbs.

🔸He was instrumental in development of The Madras Foot in 1968 – which is a customized Lower-Extremity Prostheses for the lower limb amputee. It got the advantage of bare foot walking without using shoes or any footwears and he designed in such a way that it helped married women wearing traditional toe rings.

🔸Dr. Natarajan was known for his academics and research. In the 1970s with the support of Indian Council of Medical Research (ICMR), World Health Organisation (WHO), British Medical Research Council (BMRC), he collaborated in the pioneer research “Madras Study of Tuberculosis of Spine.”

🔸He was the brainchild of Government Institute of Rehabilitation Medicine (GIRM), K.K. Nagar, Chennai – founded in 1979 for manufacturing artificial limbs and training the students of orthotics.

🔸He published many articles and chapters in General Orthopaedics and Traumatology. His widely acclaimed two volume Text Book of Orthopaedics was published in 1982 for medical graduates and its eight-edition was released recently.

🔸His outstanding contribution was honored by many awards including honorary Fellowship of Royal College of Surgeons of England and National Award for the Service to the Handicapped in 1990.

🔸Prof. Dr. M. Natarajan was an able administrator who retired as Principal of MMC Institution. He did phenomenal work in the nurturing and development of the field of orthopaedic surgery, traumatology, physical medicine and rehabilitation, physiotherapy, prosthetic and orthotic branch of studies and services.

A Trailblazer in Orthopaedics