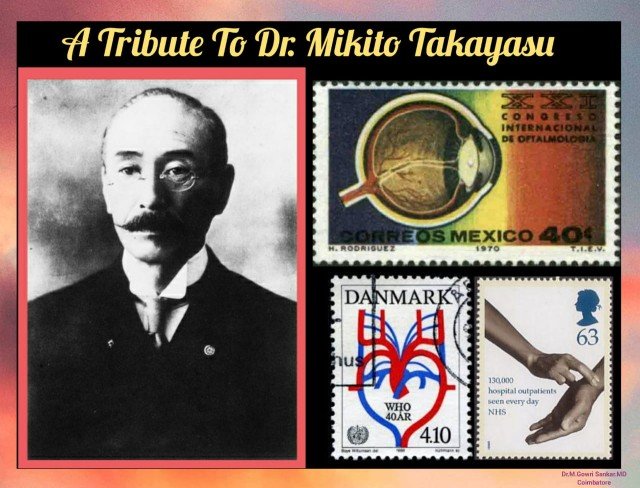 🔸Takayasu was born as the fourth son of a priest in Japan. He studied medicine at Tokyo University and graduated in 1887.
🔸Then he went to Germany and enrolled in Berlin Charity Hospital and Leipzig University to get trained in ophthalmology for 2 years.
🔸During his research days, by using Sudan dyes, he demonstrated that the cholesteral deposition is responsible for arcus senilis.
🔸After returning to Japan, he obtained his Ph.D. degree and became the Professor of Ophthalmology at the Kanazawa University.
🔸In the year 1905, a 22 year old female patient came to him with blurring of vision with redness of conjuctiva.
🔸On her fundus examination, he found some abnormalities in retinal vessels, “coronary anastomosis,” a arterio-venous anastomosis around the optic disc.
🔸On the 12th Annual Meeting of Japanese Ophthalmology Society in 1908 held in Fukuoka, Dr. Takayasu reported about the ophthalmic manifestations of the woman under the heading “A case of peculiar changes in the central retinal vessels”.
🔸Thereafter, Japanese ophthalmologists started paying attention to this disease and many cases were reported.
🔸Moreover, the Professor of Kyushu University, Dr. Yoshiakira Ohnishi also mentioned a female case resembling the ophthalmic manifestations, which was presented by Dr. Takayasu previously along with bilateral absence of radial pulse.
🔸Subsequently, “Takayasu disease” name was proposed in case reports. This was first published in Japan and then in Western literature.
🔸Later, Takayasu disease was called as Aortic Arch Syndrome and then proposed as “Pulseless Disease”.
🔸In the year 1990, the American College of Rheumatology published a classification criteria of vasculitis and included “Takayasu arteritis,” as a large to medium vessel granulomatous vasculitis. The name prevailed worldwide and became familiar in the field.
🔸In order to honor his extraordinary contribution, Prof. Dr. Mikito Takayasu ‘s was built in Kanazawa University in 2002.