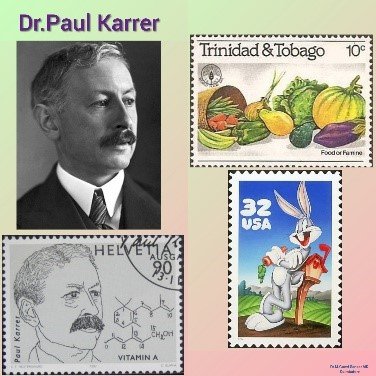 🔸Paul Karrer was born in Moscow. His parents were Swiss nationals and his father was a dentist.

🔸He studied chemistry at the University of Zurich, Switzerland and earned his Ph.D. in 1911.

🔸After his studies, he continued to teach and research at the University of Zurich till his retirement in 1959.

🔸During his research, his because curious about a coloured red-orange pigment, which is normally abundant in plants and fruits. Thereby, he extracted the Yellow carotenoids from carrot and established the correct formula for beta-carotene, the precursor of Vitamin A.

🔸Further, he extended his research and became first to unravel the chemical structure of several vitamins and also the first to synthesis these vitamins…

🔸Moreover, he confirmed the structure of ascorbic acid (Vitamin C), which was discovered by the British chemist Sir Norman Haworth.

🔸In order to honour his ground-breaking discovery on carotenoids, flavins and vitamin A and B, he was awarded with Nobel Prize in Chemistry. He then shared the prize with Sir Norman Haworth, who won it for his research on the structural formula of carbohydrates and vitamin C.