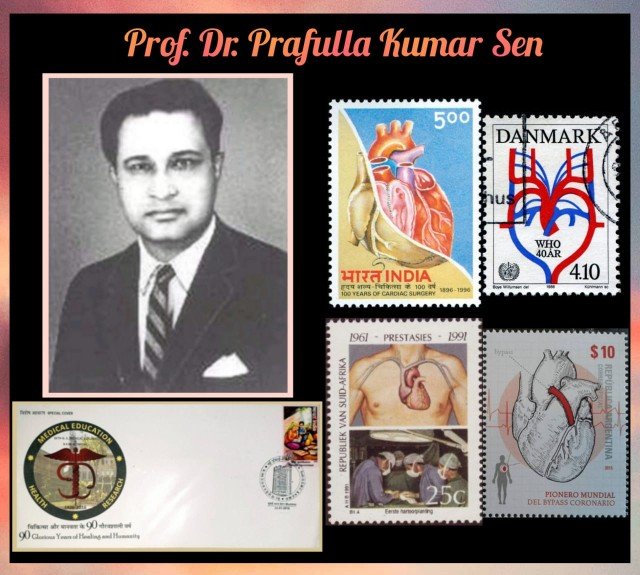 💠Founder of Cardiothoracic Surgery in India

🔹Dr. Prafulla Kumar Sen is popularly known as Dr. P. K. Sen. He was born in 1915 in Calcutta and completed his schooling in Jamtada, Bihar.
🔹He did his graduation in medicine at the G. S. Medical College, Bombay in 1938. Subsequently, he did his Master of surgery at the University of Bombay in 1940.
🔹During his college days, Dr. Sen was highly inspired by Maharishi Charaka and Western medical pioneers Dr. John Hunter and Dr. Alexis Carrel.
🔹After his studies, under Rockefeller Foundation, he did his Fellowship in Surgery at the University of Pennsylvania.
🔹Dr. Sen travelled and observed various surgical research centres all over the United States and also got trained at London, Sweden and Russia.
🔹In 1952, he returned to India and began his career in King Edward Memorial (KEM) Hospital, Bombay. Later, he got promoted as Professor of Surgery at G.S. Medical College and he was there until his retirement in 1973.
🔹In fact, during his career, Dr. Sen had performed the full range of cardiac surgeries and laid the Foundation for Cardiothoracic Surgery in India.
🔅Also, he was one of the first to perform the aortic surgery and did the Open heart surgery in India in 1950.
🔅Subsequent to the adaptation of American techniques and after completion of 25 dog experiments, he successfully performed the First Intra-Cardiac Procedure, closed mitral valvotomy in India by pushing his finger through a Rheumatic Mitral Valve in 1952.
🔅Repaired Coarctation of the Aorta in 1953.
🔅Closure of an Atrial Septal Defect in 1956.
🔅After many years of work with animal models, Dr. Sen and his team successfully performed the India’s 1st and the World’s 6th Human Heart Transplantation on 16 February 1968.
🔅Thus, he became the fourth surgeon of the world to attempt the cardiac transplantation after Dr. Christiaan Barnard, Dr. Norman Shumway and Dr. Adrian Kantrowitz.
🔅Later, he performed the second human heart transplant. However, it took another 25 years of time for the first successful heart transplant to take place in India by Dr. Panangipalli Venugopal at AIIMS, Delhi in 1994.
🔅Furthermore, he made a significant contribution by his pioneering work on Transmyocardial Acupuncture Technique to treat ischemic myocardium and subsequently he did the experimental work on Transmyocardial Laser Revascularization.
🔹Eventually, Dr. Sen’s meritorious work was honoured by Russia with Vishinskey Medal and by our country’s third highest civilian award Padma Bhushan Award.
🔹In order to remember his devoted work, the Indian Association of Cardiothoracic Surgeons established “Dr. P. K. Sen Memorial Oration” in 1993. Moreover, the Department of Cardiothoracic surgery at KEM, which was founded by him bears his name.
🔹Dr. P. K. Sen was an excellent teacher who used to enliven his lectures with poetry, philosophy, and quotations from the history of medicine. Apart from that, he was a poet and a painter. His paintings were exhibited twice in India and once in the United States.