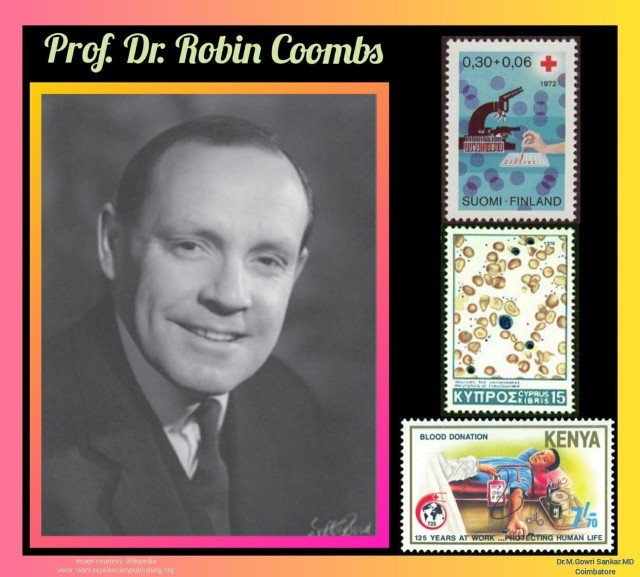 🔸Robert Royston Amos Coombs also called as Robin Coombs was born in London but brought up in Cape Town, South Africa.
🔸After his schooling, he returned to Britain to study Veterinary medicine at Edinburgh University. Then he completed his Doctorate at Kings College, Cambridge in 1947.
🔸While doing his doctorate, he collaborated with his two senior colleagues Dr. Arthur Mourant and Dr. Rob Race and together they developed and published the antiglobulin test in 1945.
🔸The test was named as Coombs test, which is used to detect the anti-rhesus (anti-D) antibodies.
🔸Subsequently, the Coombs test was widely appreciated and published in The Lancet in 1945 and in The British Journal of Experimental Pathology in 1946.
🔸Shortly, his test became the base laboratory investigation in the fields of hematology and immunology.
🔸He then became the Professor of the Department of Pathology of University of Cambridge. Later, he got appointed as the Professor of Biology in 1966 and continued to serve at Cambridge University until 1988.
🔸The research interests of Dr. Coombs on the properties of antibodies led to the development of several tests for antibodies and antigens and its corresponding clinical applications.
🔸His Eponyms…
🔅 Coombs reagent or anti-human globulin – It is made by injecting human globulin into animals, which produce polyclonal antibodies specific for human immunoglobulins and complements.
🔅 Coombs test – It is used to detect the presence of antibodies against the circulating red blood cells in the body, which causes hemolysis.
🔅 Direct Coombs test – A test for detecting sensitized erythrocytes in erythroblastosis fetalis (which is now known as hemolytic disease of the newborn) and in cases of acquired immune haemolytic anaemia.
🔅 Indirect Coombs test – A test routinely performed in cross-matching blood or in the investigation of blood transfusion reaction.
🔅 “Gell-Coombs Classification” – Along with Prof. Philip Gell, he devised the classification of allergic reactions into four pathophysiological types, which is widely adopted in the medical field worldwide. They are:
▪️Anaphylaxis (Type I)
▪️Antibody-mediated cytotoxic reactions (Type II)
▪️Immune complex-mediated reactions (Type III)
▪️Delayed type hypersensitivity (Type IV)
🔸Thereafter, he published a book “Clinical Aspects of Immunology,” along with Prof. Gell in 1963, which became the leading textbook on medical immunology.
🔸Moreover, he explained Sudden Infant Death Syndrome (SIDS) as an anaphylactic reaction to dairy proteins “milk-anaphylaxis.”
🔸In fact, Dr. Coombs was an inspiring teacher and an astute academician and one of the founders of the British Society for Immunology, who received many honorary degrees for his meritorious service in the field of immunology from various Universities.
🔸Coombs test is one of most simple and economic tests. It has been widely used in clinical laboratory for past 75 years and is an important tool for ensuring safe blood transfusions and helps in the diagnosis of hematological diseases.