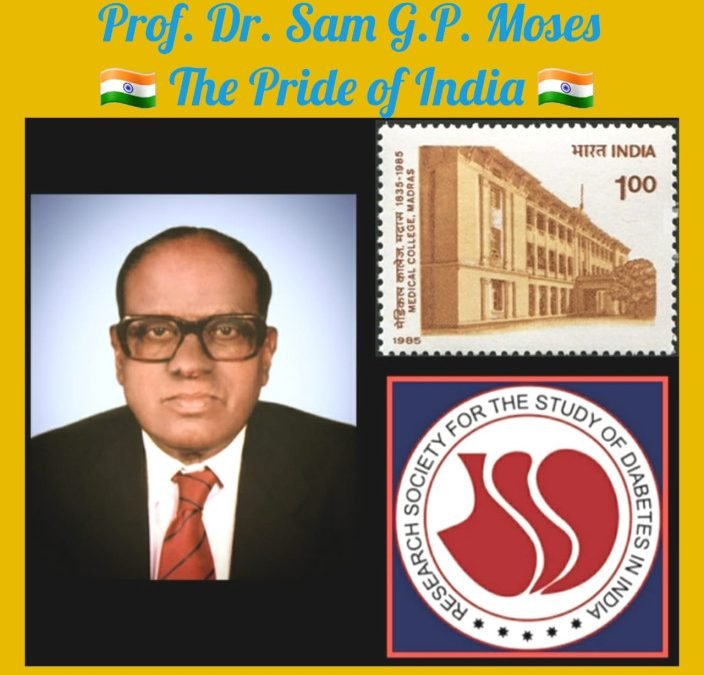 💠Doyen of Diabetology in India

🔸Dr. Sam G. P. Moses was born in a small town called Nazareth in the Tirunelveli district of South Tamil Nadu. Since childhood, he was inspired by the profession of his father Dr. J. T. Moses, who was a well-known general practitioner in his hometown.

🔸He excelled in his medical studies and got university rankings in many subjects and graduated in the year 1949.

🔸He further completed his M.D in General Medicine from MMC with first rank.

🔸In fact, his aspiration to become a teacher made him join Madras Medical College. There he served for more than thirty years till his retirement in 1983.

🔸Dr. Moses had the credit of being the youngest Professor of Medicine in 1957 at Madras Medical Service at 30 years of age.

🔸He was one of the professionals, who predicted that diabetes would become a widely prevalent disease in India.

🔸Later, this Diabetic clinic got upgraded as a separate Department of Diabetology with 12 beds in 1979 and Prof. Dr Sam G. P. Moses became the first honorary Professor of Diabetology, where he continued his active teaching and training on diabetes.

🔸Under his strong administration, a chair in the Department of Diabetology was created and Prof. Dr. V. Seshiah became the first-ever Professor of Diabetology in the Country.

🔸Of course, Dr. Moses was celebrated as an inspired teacher because he stimulated many undergraduates as well as postgraduate medical students.

🔸During his career, he conducted and participated in many national and international conferences connected with diabetes.

🔸Actually, Prof. Dr. Moses was affectionately called “Father of Diabetology” for having developed Diabetology as a separate speciality. Even after his retirement, he continued to extend his support to the Department of Diabetology for more than twenty years.

🔸Also, Prof. Moses became the founding member of the Research Society for the Study of Diabetes in India (RSSDI) along with Prof. Dr. M. M. S. Ahuja in 1972.

🔸Furthermore, Prof. Moses initiated the first RSSDI membership drive in the country and helped in establishing the Society in South India in later years.

🔸 To spread the objectives of RSSDI, he travelled extensively for many years throughout India and successfully organized the third annual meeting of RSSDI in 1975 in Chennai.

🔸He ultimately received a rare honour and an early tribute by the introduction of the First Oration of RSSDI in his name “Prof. Dr. Sam G. P. Moses Oration” for the study of diabetes in India.

🔸He was also the Founder Fellow of the All India Institute of Diabetes and the Indian College of Physicians (ICP), which is an academic wing of the Association of Physicians of India (API).

🔸Moreover, he published many original papers and articles and presented the first Indian paper on Malnutrition and Diabetes in 1971.

🔸His outstanding contributions in the field of diabetology and academics earned him receive many honours and awards, both nationally and internationally including:

🔅Honorary Fellowship of the Royal College of Physicians, Glasgow.

🔸Eventually, Prof. Dr. Moses became the most respected icon in the discipline of diabetology and endocrinology. He strongly believed that education and awareness are key to reforms. So, with great zeal, he travelled to remote parts of the country and created awareness about diabetes.

An Astute Physician & A Remarkable Teacher