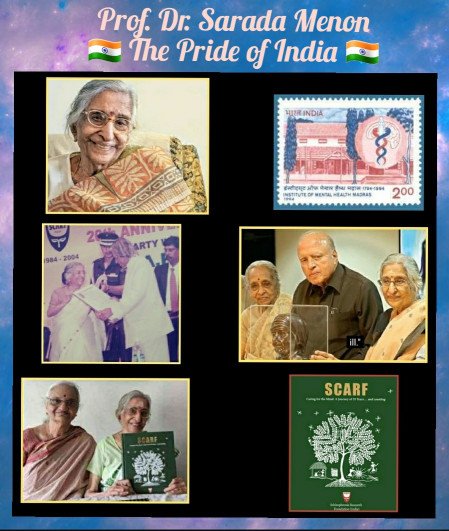 The Story of a Women with Many Missions

🔹Sarada Menon was born in a Malayalam speaking family in 1923. She was brought up in Chennai where she studied medicine and was graduated from Madras Medical College in 1947.

🔹She completed her MD in General Medicine at Madras Medical College in 1953.

🔹During her college days, she witnessed the sufferings of mentally ill patients. Being an empathetic physician, she decided to study psychiatry.

🔹She studied Diploma in Psychiatric Medicine at the National Institute of Mental Health and Neurosciences (NIMHANS), Bengaluru. Thereby, she became the first woman psychiatrist of our nation.

🔹In 1959, she joined at Institute of Mental Health, Kilpauk in Chennai, which is the oldest mental health hospital – started during British period in 1794.

🔹There she dedicated herself and worked for the betterment of the mentally ill patients. She was the longest-serving Head of the Institute of Mental Health and also held the post of Superintendent of the Institute for more than 18 years.

🔹During her career in Institute of Mental Health, she was instrumental in bringing the following reforms and innovations:

🔅Improved the quality of case records.

🔅Encouraged the entry of local community volunteers to oversee patients and council their families.

🔅Modernized the kitchen and ensured good quality of food.

🔅Full-fledged Medical Library inside the campus.

🔹She played an important role in initiating the participation of social organizations in the rehabilitation of mentally ill patients.

🔹Soon after her retirement, Prof. Dr. Menon and like-minded psychiatrists Dr. Thara Rangaswamy, Dr. Raj Kumar founded the Schizophrenia Research Foundation (SCARF) in 1984, a non-profit organization for the rehabilitation of people afflicted with schizophrenia and other psychiatric diseases and for the support of their caregivers.

🔹SCARF has been affiliated with the World Health Organisation (WHO) as a collaborating centre for mental health research and training towards the treatment of mental illness.

🔹Prof. Dr. Sarada Menon authored several papers on mental health and she was conferred with various awards including:

🔅Padma Bhushan Award from Government of India in 1992.

A Passionate Teacher & A Stalwart in Psychiatry