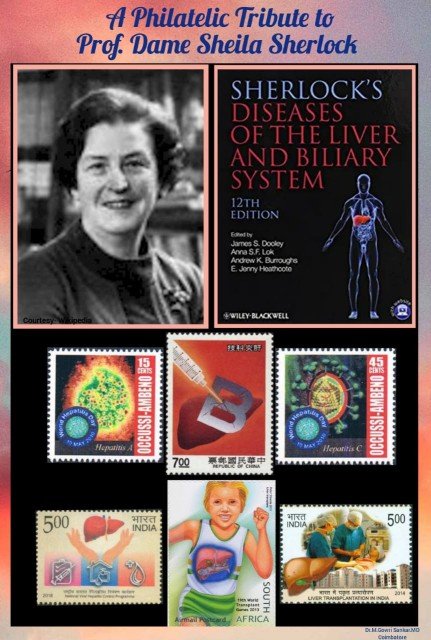 🔹In early part of the 20th century Britain, it was very difficult for female applicants to get into medical school. Sheila was rejected by many colleges before gaining a place at Edinburgh University in 1936.
🔹After her medical graduation with gold medal, she got appointed as the lecturer and consultant physician at the Hammersmith Hospital & Postgraduate Medical School.
🔹When she began her medical career, very little was known about the liver disease, so she started her research work on hepatitis.
🔹At her age of 32 years, she was elected as the first woman of the Fellow of Royal College of Physicians of London. Later, she became its first vice president.
🔹In the year 1959, she became the Britain’s first ever Female Professor of Medicine and got appointed at the Royal Free Hospital School of Medicine in London.
🔹Thriving in the vibrant research atmosphere, she produced an impressive landmark studies on liver diseases and become a world renowned hepatologist.
🔹There she conducted an extensive research on bilirubin metabolism, haemochromatosis, cholestatic liver disease, drug- induced hepatotoxicity, primary biliary cirrhosis, autoimmune hepatitis etc.
🔹She also introduced various new techniques like hepatic vein catheterization, intrasplenic pressure measurement and venography in assessing portal hypertension. Also she introduced and widely used needle biopsies in diagnosing the liver diseases.
🔹In fact, doctors from all over the world got trained from her and she mentored hundreds of aspiring hepatologist.
🔹Throughout her glittering 60 years on liver research, she established the Field of Hepatology.
🔹Her most widely known book Sheila Sherlock’s “Disease of the liver and biliary system” was first published in 1955. It became the first standard textbook on clinical liver disease and it has been translated into six other languages.
🔹Moreover, she was the founding member of the European Association for the Study of the Liver (EASL) and the first editor of this journal. Also, she was one of the first members of the American Association for the Study of Liver Diseases.
🔹All over her career, she was honoured with various awards, numerous honorary doctorates and received Dame from the Queen of Britain in 1978.
🔹In order to honor her meritorious service, the liver treatment service at the Royal Free Hospital was re-named as Sheila Sherlock Liver Centre in 2008.