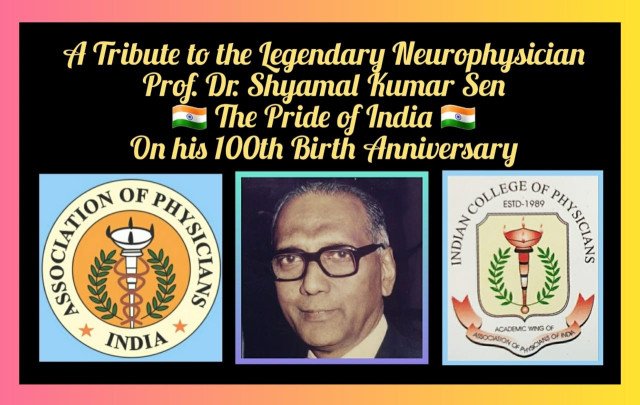 💠Doyen of Neurology in Eastern India

🔸Shyamal Kumar Sen was born in a small village in the district of Bankura, West Bengal. His father was a legal prosecutor and his mother was a homemaker.

🔸During the first year of the Second World War and high political turbulence in British India, he joined to study medicine at Calcutta Medical College in 1939 and successfully completed his medical graduation with many medals in 1945.

🔸During his college days, he had a brilliant academic career and he was much inspired by the Giants of Medicine in Calcutta such as Dr. M. N. De and Dr. Joges Chandra Banerjee.

🔸His aspiration to become a teacher made him join as a Tutor in Department of Physiology in 1948 in his Alma mater and later he moved to Department of Pathology as a demonstrator.

🔸After completing his MD graduation from the University of Calcutta in 1956, he sailed to United Kingdom (UK).

🔸In UK, he worked and got trained in Neurology at various institutions such as National Hospital, Queen Square, London, Maida Velle Hospital and Midland Centre of Neurology and Neurosurgery.

🔸There he was mentored by great British teachers like Lord Russel Brain and Dr. Edwin Bickerstaff (known for his book on Clinical Examination in Neurology). Dr. Sen also successfully completed his MRCP (Edinburgh) in early 1960s.

🔸After his return from the UK, he joined as an Assistant Professor in Medicine at Calcutta Medical College in 1963 and started a separate Department of Neurology. Later, he became the Professor and Head of both medicine and neurology departments.

🔸Also, he took in charge of the Department of Neurology at the Institute of Post Graduate Medical Education and Research (IPGME&R) and Bangur Institute of Neurosciences, Kolkata, where he started his active teaching and training of DM Neurology residents.

🔸Later in 1979, he joined at Vivekananda Institute of Medical Sciences (VIMS), Kolkata and he was instrumental in establishing the Department of Neurology. Moreover in 1985, he was appointed as Dean of VIMS and he held the post till 1999.

🔸Throughout his career, he was celebrated as a superb bedside teacher and as a clinician. His method of clinical neurology teaching was systematic by elicitation of history, analyzing the symptoms with differential diagnosis, the demonstration of physical signs and finally arriving at “where” and “what” is the lesion.

🔸Besides being a clinician and teacher himself, he had interest towards music and literature. Even during his college days, he learned Sanskrit and did Diploma in Sanskrit. Later, he inculcated the knowledge regarding ancient Hindu scriptures and the Vedantic philosophy.

🔸Also, his recitation from the Bhagavad Gita, the Upanishad or even the literature works of Rabindranath Tagore or William Shakespeare would leave any audience spellbound.

🔸Furthermore, Prof. Sen was instrumental in the following ways:

🔅Founding member of West Bengal Branch of Association of Physicians of India (API) and became its President in 1985.

🔅Founding member of Association of Neuroscientists of Eastern India (ANEI).

🔅Established the Indian College of Physicians (ICP), which is an academic wing of API and became its First Dean in 1990. He was also Editor-in-Chief of ICP’s first book “Update in Internal Medicine” published in 1990.

🔸During the last few years of his life, he became disabled with aphasia due to stroke. But his zeal for learning was unparalleled, he continued to attend clinical neurology meetings in Kolkata city till his last days.

🔸For his meritorious service, the Medicon International event, which has been organised by Peerless Hospital, Kolkata in collaboration with The Royal College of Physician of Edinburgh and API West Bengal Chapter, honoured Prof. Sen by conducting “Dr. Shyamal Sen Memorial Oration” every year.

🔸Clearly, Prof. Dr. Shyamal Kumar Sen has done a phenomenal work in the field of neurology through teaching, training, research and as an administrator par excellence in Eastern India.

🔸His famous quote… “If you are unable to make a clinical diagnosis by the time you have put your pen down, you would never be able to make it even after a full examination.”

An Astute Clinician & A Legendary Neurophysician