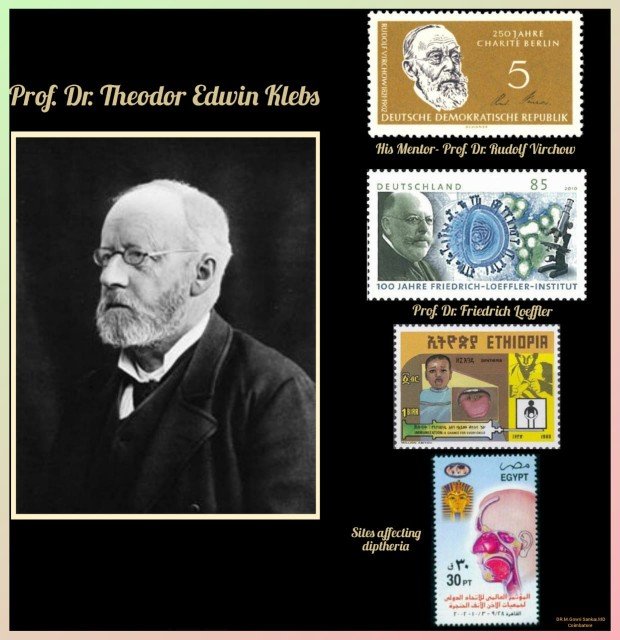 🔹Klebs studied medicine at the University of Wurzburg under the teaching of Prof. Rudolf Virchow and received his doctorate at the University of Berlin in 1858.
🔹After completing his studies, he started working as an assistant to Virchow at the Pathological Institute, Berlin. Klebs also held several professorships in European universities and in Rush Medical College, Chicago in 1896.
🔹In fact, he became well known for his work on the bacterial theory of infection. He further joined a German bacteriologist Dr. Friedrich Loffler and successfully identified the bacterium Corynebacterium diphtheriae as the etiological cause of Diphtheria in 1883. This bacterium is also known as the “Klebs-Loffler bacillus.”
🔹Consequently, his works paved the way for the beginning of modern bacteriology.
🔹Simultaneously, he also made many important contributions in the field of medicine.
🔅Described acromegaly in 1884.
🔅Inoculated primates with syphilis.
🔅First to produce tuberculosis experimentally in animals by injecting the milk of infected cows and thereby established the bovine origin of the disease.
🔅First who described the typhoid bacillus.
🔅First experimental production of valvular disease of the heart and the recognition of bacterial infection in the production of the endocarditis.
🔅First description of haemorrhagic pancreatitis as a rapidly fatal disease.
🔅Described the classic features of glomerulonephritis, also known as “Klebs Disease.”
🔅Invented the paraffin wax embedding method in histological studies and designed solid media for bacterial culture.
🔹Apart from his monographs and articles, he also published “A Handbook of Pathological Anatomy” and “A Treatise on General Pathology.”
🔹In order to honor and remember his work, the Bacterial Genus “Klebsiella” was given his name and thus he is fondly remembered.
🔹Moreover, his devoted work in medicine made Dr. Edwin Klebs being celebrated as a distinguished bacteriologist, pathologist and tuberculosis specialist till date.