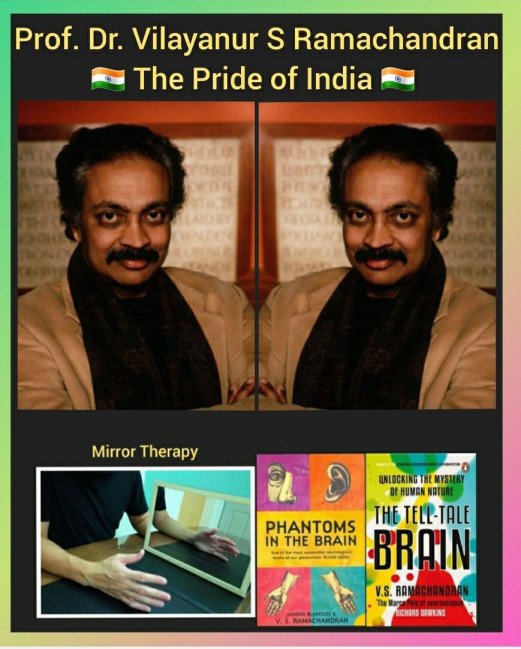 🔹After completion of his studies, he got appointed as an Assistant Professor in Department of Psychology at the University of California, San Diego in 1983 and was subsequently promoted as a Professor during 1998.

🔹In fact, he is well-known for his optimal performance in Behavioral neurology and visual perception.

🔹He further did his ground-breaking research on Phantom limbs and invented a Mirror Box – the mirror visual feedback (mirror therapy) as a treatment for phantom limb paralysis.

🔹Moreover, he was recognized as one of the first scientists to conduct research by using Functional MRI for Color Synesthesia, which arise from cross activation between brain regions.

🔹He also researched about the fascinating role of Mirror Neurons, which explains the various human mental abilities such as empathy, imitation learning and evolution of language.

🔹Thereby, he declared that “Mirror neurons will do for psychology what DNA did for biology.”

🔹Furthermore, he was the first to publish “Apotemnophilia” (Body Integrity Dysphoria) as a neurological disorder caused by the damage to right parietal lobe of brain and the neural basis of Capgras delusion.

🔹He has published more than 200 research articles in neuropsychology and he is well-known for the following best-selling books:

🔅The Encyclopedia of Human Behavior (2012)

🔹He has been conferred with two honorary doctorates – from Connecticut College in 2001 and the Indian Institute of Technology, Chennai in 2004. Also, he has received many awards and Fellowships from reputed institutions and societies including:

🔅Henry Dale Medal from the Royal Institution of Great Britain, 2005

🔅”Scientist of the Year” from the ARCS Foundation (Achievement Rewards for College Scientists), the United States in 2014

🔹Besides, he is very fascinated by Paleontology. While he was a young boy, he used to collect the sea shells and fossils and send his findings to the American Museum of Natural History. He has shown interest in unearthing the rarities required by the museum.

🔹Indeed, he purchased the skull fossil of a dinosaur for $10,000 and donated it to the Victor Valley Museum, California in 2009. To honour his work, that Dinosaur was given the name Minotaurasaurus ramachandrani.

🔹Eventually, his consistent performance got him promoted to the present post of Director of the Centre for Brain and Cognition  at the University of California and an adjunct Professor at the Salk Institute.

🔹Prof. Dr Ramachandran is a mesmerizing speaker, who delivers lectures on neuroscience connecting psychologically and philosophically in a simple way. His meticulous role in medicine has earned him the recognition – “A latter-day Marco Polo of Neuroscience” and “The Modern Paul Broca.”

The Sherlock Holmes of Neuroscience