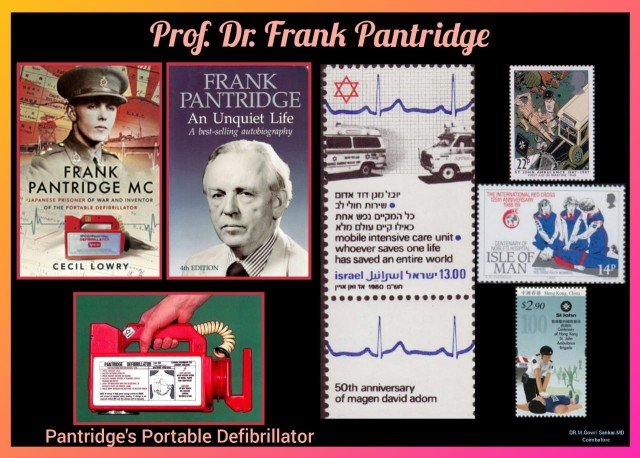 🔹Pantridge was brought up on the outskirts of Northern Ireland. Unfortunately, he lost his father at his young age of 10 years.
🔹After great struggle, he completed his schooling. He then joined to study medicine at Queen’s University of Belfast and received his medical graduation in 1939.
🔹While he completed his studies, there was a sudden outbreak of Second World War, so he volunteered himself to serve in the British Royal Army Medical Corps and thereby he was sent to Singapore.
🔹Sadly, he was imprisoned during the fall of Singapore to Japanese troops. Hence, he served as a slave labourer for about four years in a camp.
🔹Since he was in prison for long, Pantridge emaciated and contracted fatal Cardiac Beriberi due to severe nutritional deficiency.
🔹As soon as he returned to his town Belfast, he began his research in Cardiac Beriberi and then won a scholarship from the University of Michigan to study Cardiology.
🔹Thereupon, he got appointed as a Cardiac Consultant at the Royal Victoria Hospital, Belfast and later he became a Professor at Queen’s University.
🔹Subsequently, he made his significant contributions to Medicine in General and Cardiology in particular.
🔹In 1957, Pantridge & his colleague jointly designed and introduced the Modern System of Cardio Pulmonary Resuscitation (CPR) for adding value to the early treatment of cardiac arrest.
🔹Subsequent to his further studies, he realised that many deaths that happened due to coronary heart diseases resulted from ventricular fibrillation – Which could be corrected by a brief electric shock to the chest and moreover which was supposed to be treated before the patient got admitted in the hospital. This led him to introduce the Mobile Coronary Care Unit.
🔹Further, in order to extend the utilization of early treatment, Dr. Pantridge developed the World’s First Portable Defibrillator by using the car batteries for the electricity.
🔹He then installed it in an ambulance and the device was put in use from 1966. In fact, the first model was about 70 kilos of weight. Thereafter, he refined the design of defibrillator to 3 kg of weight.
🔹His Belfast treatment system, often known as the “Pantridge Plan,” was easily adopted all over the world at emergency medical services.
🔹Thereby, Dr. Pantridge pioneered the Prehospital Coronary Care and Emergency Medicine. As a result of his invention, the process used in Emergency Departments to treat cardiac arrest is known as “The Belfast Protocol.”

A Cardiologist Who Invented the Portable Defibrillator.