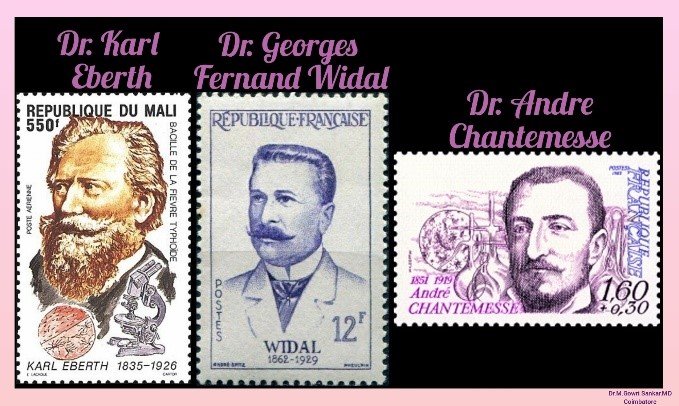 🔹Georges Fernand Widal was born in Algeria. His father was a Medical Inspector for the French army.

🔹In fact, he became famous for his bedside teachings and studies at Cochin Hospital in Paris, where he served the last 25 years of his life.

🔹It happened in 1880, when Dr. Karl Joseph Eberth, a German pathologist first discovered the rod-shaped bacteria in fatal cases of typhoid fever, in spleen, lymph nodes and peyer’s patches.

🔹After 4 years, Dr. Eberth along with German Pathologist Dr. Georg Gaffky isolated and obtained the culture of typhoid bacillus in 1884. The bacilli were named as “Eberthella typhi“, “Eberth’s bacillus” or “Gaffky-Eberth bacillus.”

🔹Exactly after 12 years of discovery of typhoid bacillus Dr. Widal did an investigation on the pathogenesis of the typhoid fever.

🔹In cooperation with Dr. Andre Chantemesse, who was a French Bacteriologist, Dr. Widal discovered the agglutination test that bears his name – Widal Agglutination Test – in 1896. Thereby, Dr. Widal became one of the Founders of Serodiagnosis.

🔹Furthermore, he worked in several areas of medicine such as shock, asthma and immunization.

🔹Prof. Widal then got interested in the study of nephritis. He assessed the prognosis of kidney disease based on blood Non- Protein Nitrogen (NPN) levels.

🔹Subsequently, he demonstrated that Edema is due to salt retention and further he recommended to reduce the intake of salt in edematous patients and protein in azotemic patients.

🔹In order to honour his service, The Art Deco Monument designed in the wall of the Cochin Teaching Hospital in Paris to remember the fabulous work of Prof. Fernand Widal.