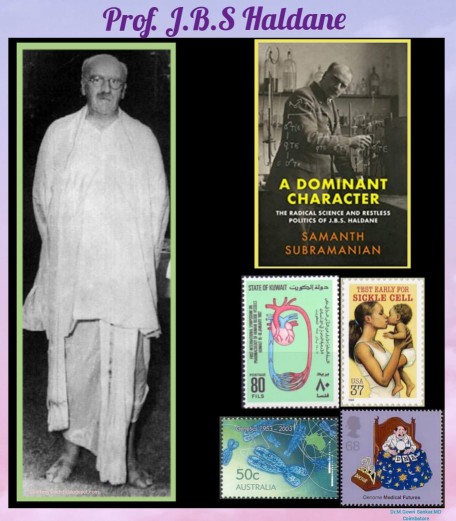 🔹Haldane was born to a physiologist father, who was also a philosopher at Oxford. During his youth, Haldane voluntarily did many self-experimentation at his father’s home laboratory.
🔹After his schooling, he studied mathematics and philosophy at the University of Oxford.
🔹At the same time, he had a great interest in research on Physiology and Genetics. He then started his career at the University of Cambridge and subsequently began his research on Enzymes and Genetics.
🔹Later, he became a Professor of Genetics at University College, London in 1933 and he served there until he left the UK in 1957.
🔹After his research, he published the mechanism of Gaseous exchange in haemoglobin and subsequent works on the chemical properties of blood as a pH buffer.
🔹In fact, Haldane made important contributions to the foundation of enzyme kinetics in biochemistry.
🔹Further, by combining both mathematics and biology, he introduced the new subject “Population Genetics”. It’s the study about genetic variation within a population.
🔹Thereupon, he constructed Gene Maps for Haemophilia and colour blindness on X chromosomes.
🔹Also, he declared that sickle-cell disease confers some immunity to malaria. Also he was the first to suggest the central idea of In vitro fertilisation.
🔹Being a classical scholar, he was drawn to India’s ancient civilizations, religions, languages and cultures. He also had a desire to pursue research on Indian plant, animal species and human populations.
🔹Therefore, he emigrated to India and joined the Indian Statistical Institute, Calcutta to set up the exclusive biometrics department.
🔹There, he encouraged young Indian scientists and continued to publish his own research. He also adopted the Indian dress code and took Indian citizenship.
🔹Furthermore, he published around 400 papers and 24 books. Also, he contributed significantly to various fields such as physiology, genetics, biochemistry, statistics, biometry, cosmology and philosophy.
🔹Although he never earned any formal qualifications in any branch of science, yet he is celebrated as one of the greatest scientists of the 20th century.
🔹Because of his immense interest in science, he decided to donate his body to the Rangaraya Medical College, Kakinada for medical studies. He passed away in 1964.
🔹Prof. Haldane had a great love for India. Once he had said “One of my great passions was observing the stars in the clear Indian skies.”