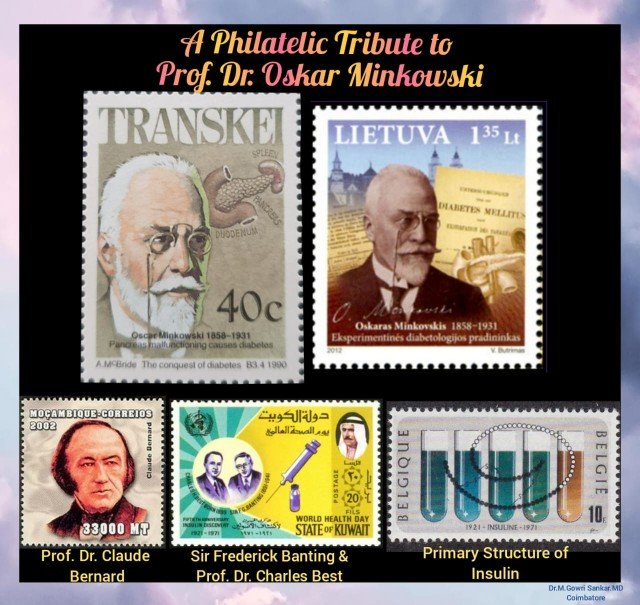 🔹Minkowski studied medicine at the University of Konigsberg, Germany. Then he began his career as an Assistant and later promoted as a Professor in Clinical medicine in Strasburg during 1888.
🔹Once he was reading an article of German Physician Dr. Joseph von Mering, who stated that pancreatic enzymes were required to break down fatty acids in the gut.
🔹Subsequently, the French physiologist Dr. Claude Bernard declared that pancreatectomy would be the best way of establishing Von Mering’s assertion.
🔹Minkowski got inspired and collaborated with Dr. Von Mering in 1889. He began the investigation on dogs by removing the pancreas in them and then found that the dogs developed polyuria. He also examined the urine of dogs and identified that it contained glucose.
🔹Furthermore, Dr. Minkowski implanted a small portion of pancreatic tissues subcutaneously in depancreatized dogs and observed that hyperglycemia was prevented until the implant was removed or had spontaneously degenerated.
🔹Then they hypothesized that the pancreas control the glucose metabolism by generating a hormone. Thereby, they created a Milestone in the History of Diabetes.
🔹The early researches of Prof. Oskar Minkowksi had paved the way for Sir Frederick Banting and Dr. Charles Best to carry out the further investigations on the relationship between pancreatic secretions and diabetes.
🔹Finally, Dr. Banting and Dr. Best isolated insulin from pancreatic islets and administrated to diabetics. Thereby, they inaugurated a new era in diabetes treatment and started saving millions of lives.
🔹In order to honor the awesome work of Prof. Minkowski, the European Association for the Study of Diabetes had announced The Minkowski Prize in the year 1966. This award is offered to the outstanding contributor for the advancement of knowledge in diabetes mellitus.