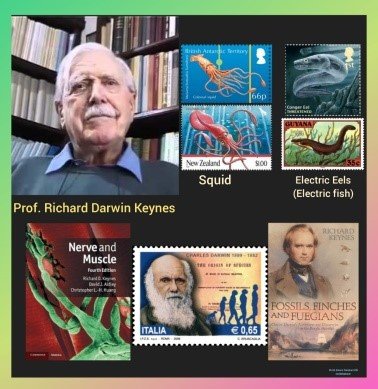 🔹Keynes was the great-grandson of Charles Darwin. He studied Natural Science course at Trinity College, Cambridge and then completed his Ph.D. under the guidance of well-known physiologist Sir Alan Hodgkins.

🔹After his studies, he joined as a faculty at the University of Cambridge and became a Professor of Physiology in 1973. He served there until his retirement in 1987.

🔹Through his experiments, Keynes dissected squid (a sea creature) and studied the biophysical properties of nerve fibres by using radioactive tracers.

🔹He made a ground-breaking discovery by using Radioactive sodium and potassium. Hetraced the “Influx of Sodium ions and efflux of Potassium during the transmission of nerve impulse.“

🔹He also proved that the nerves and muscles maintain their ionic concentration gradient by using “Sodium Pump.“

🔹Furthermore, he elucidated the mystery of how Electric Eels (electric fish) project huge electric charges to stun and kill its prey.

🔹Ultimately, he published his work in the following books:

🔅The Comparative Physiology of Sensory System (1984).

🔹Moreover, he made significant contributions to our understanding and appreciation of Darwin’s genius. He wrote the biography of Charles Darwin through his books…

🔹In the end, Dr. Richard Keynes was celebrated as a distinguished researcher and a champion for his work on the legacy of his great-grandfather Charles Darwin.